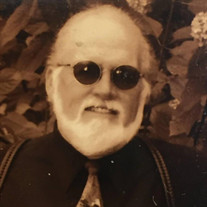 James William Daugherty, 67, passed away on Thursday, October 28, 2021, in Knoxville, surrounded by his family. Bill was born in Middlesboro, Kentucky, and grew up there until his teenage years, when his family moved to Knoxville. He attended Rule High School and was a 1973 graduate of West High School. Bill marched to the beat of a different drum. As a young boy, Bill was a great athlete, lighting fast and tough as nails, with terrific reflexes. Although many urged him to, he never got involved in organized sports. But he never lost that edge, even in later life. Following graduation, Bill married his high school sweetheart, Elaine, and they started a family. After a 3-year stint in the Army with the 101st Airborne Division, which allowed him to travel to Germany, Bill came home to Knoxville and quickly became a jack-of-all-trades, a true Mr. Fix-it. Bill was also a voracious reader and his quest for knowledge was unbounded. He savored life, and took every opportunity to see the country and behold its landmarks, taking thousands of photographs and sharing them. Along with all the skills he learned to do for his day-job, it seemed Bill knew something about practically everything, and he eagerly shared it with those he cared about. He loved nature and found every mountain he could see to be wondrous. Bill was an adventurer, traveling for years with friends over tens of thousands of miles of the American West, riding his Harley to enjoy and experience towns of the old west that he had read about, as well as Yellowstone, Yosemite, the Badlands, and many other national parks. He was also a dog whisperer of sorts, especially with his beautiful Dobermans, Chester, Kruger, and Dog, among many others. No one could train a dog as Bill could, and he prided himself in showing them off. Family and friendship were commitments to Bill. And no one had a more committed husband, son, brother, father, or friend than him. He was there for you when you needed him, and even when you didn’t. Bill was devoted to every member of his family, especially Elaine and the kids. He made family a priority throughout his life and particularly enjoyed spending time with his four grandsons. Bill also made life easier for each of his brothers and sisters, always there to back them up or help them out, and toughening them up in order for them to deal with hard times they might face. And to his nieces and nephews, he was their steadfast champion. In the end, they say, the only true test of loyalty of fidelity in the face of ruin and despair. Bill was the king of loyalty…to his family and to a legion of friends. It is a testament to this virtue that Bill had known most of his closest friends for 30, 40 or even 50 years, and few even longer. When you met him, you had a friend for life, and Bill’s friends were scattered from one end of the country to the other. Each of us knew that Bill would march headlong into the maelstrom of war for us. And he did. His loyalty was infinite, as he visited and helped relatives and friends whom others had long forgotten or given up on. Bill never gave up on anyone, even when almost everyone else may have done so. Bill was “old school” in his thinking about duty, always showing up on time for work and gladly making whatever sacrifices were necessary to honor his commitment to a relative or a friend. Whether your heat pump went bad, your sink stopped up, your car died, or you just experienced a death in your family, Bill was a phone call away to make it better. He gave you heat. He gave you a lift. He gave you comfort. And he was considerably more forgiving than most. Filled with genuine compassion and kindness, Bill had a heart of gold, and was always ready to help, dropping everything to help a single mom, an elderly person, some down-and-out fellow, or anyone whose circumstances made them helpless, whether they knew him or not, rarely charging them for his work. As much as anything, we will miss Bill’s stories. Like all great storytellers, it seems as if every time he told the same story he had left something out the time before. Through his stories, he took us places we’d never been and allowed us to share in his experiences, and even if we knew he’d top them off with a little bit of embellishment, it was well worth it just to hear Bill tell it his way. For all of us who loved him, Bill’s life ended way too soon, and it’s hard to think we’ll not have him around anymore to share our lives. We’ll all miss him dearly and think of him often. Passing before Bill were his parents, William Albert and Mary Daugherty: sister, Brenda Sue Gray; his beloved wife, Elaine, and daughter, Michelle. Bill is survived by his son, William Cordell; grandchildren Ryan, Nate, Ian, and Rowan; siblings and their spouses, Tona Faye Daugherty, Janice Anne Hawley (Paul), Michael Leon Daugherty (Leesa), and Donald Edward Daugherty (Judith); and a host of aunts, nieces, nephews, cousins, and countless friends. Family and friends will meet for a graveside service at 1:00 pm on Wednesday, November 3, 2021, at Highland Memorial Cemetery. In lieu of flowers, Bill’s family would ask that donations be made in his name to the Native American Heritage Association, http://www.naha-inc.org 12085 Quaal Road, Black Hawk, SD 57718. Online condolences may be extended at www.rosefuneraltn.com

James William Daugherty, 67, passed away on Thursday, October 28, 2021, in Knoxville, surrounded by his family. Bill was born in Middlesboro, Kentucky, and grew up there until his teenage years, when his family moved to Knoxville. He attended... View Obituary & Service Information

The family of James William Daugherty created this Life Tributes page to make it easy to share your memories.

Send flowers to the Daugherty family.