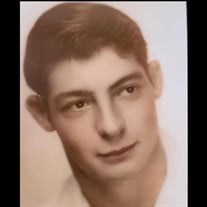 James Gilbert Hensley, Sr. (Gib), age 88, of Knoxville, Tennessee passed away peacefully and honorably in his home on January 11, 2021 with his family by his side. Gib was born on January 19, 1932 to parents James Ira Hensley and wife Ethel Hensley. He was the eldest of 4 brothers whom he treasured. Gilbert was a veteran of the United States Army 82nd Airborne Division where he received an Expert Marksman Badge. Not only did Gib love serving his country, but he was also extremely skilled at what he did. Gib was a paratrooper who repeatedly went into the face of danger, a lot of times in the dark of night. His bravery served him and his country well and he rapidly became fond of the adrenaline pumping night jumps that he was a part of. During this time, he even earned the name Puddle Jumper—humor never evaded his persona. He was a proud, but humble, man with many accomplishments in his life and service to his country. Gilbert was also a generous man who was always there for his family, neighbors, and friends. He took pride in helping others and providing for his family in every way. Gilbert was a mechanic by trade who could fix anything he laid his hands on. In his spare time, he loved to hunt, fish, play golf, bowl, and even play video games. Gib became a devoted husband to his wife Barbara at the age of 20. Their love story is picture perfect and a standard our family values. Barbara and Gilbert would have celebrated 68 years of marriage on August 20, 2020. Gilbert lived exactly 6 months to the day after the love of his life, Barbara, who was his rock, left this physical world. He missed her deeply and we are elated that he is reunited with his sweetheart. Gilbert loved his wife and children fiercely. He adored his home, Barbara’s cooking and let’s not forget—his garage! He was a magnificent husband, father, provider and made Barbara so happy. They had a blessed life that deserves to be celebrated with joy, pride, honor, and wonderful memories. There was never sadness, even in sickness. Gib's humor matched Barbara’s wit; they were hilarious, and the house was full of love and laughter. It was beautiful to watch and experience. We are truly blessed in so many ways. Instead of a sad time, our family views this as a celebration of a beautiful, strong, effortless couple that fought all their battles together and usually in sync. They were powerful, honorable, and displayed an ideal love. We speak about them as a couple now because they truly were one unit, one being. This is the end of a beautiful era. However, they left the blueprint for us to follow. Their bond displayed how to truly love, protect, and respect one another. Gilbert and Barbara instilled honor and humbleness into our family, and we are forever blessed to have them. Gilbert and Barbara were strong as individuals, but unbreakable together. Gilbert was preceded in death by his wife Barbara Ruth Hensley; parents James Ira Hensley and Ethel Hensley Corum; brothers Kenneth Hensley and Eddie Corum; parents-in-law Samuel Robert and Elsie Mae Bean; brother-in-law William Ralph Tillery II; son-in-law Stanley English Pollard Sr.; nephews Jeffrey Scott Ford and William Ralph Tillery III. Gilbert is survived by his brother Howard Hensley and wife Denise Hensley; children Janice Elaine Pollard, James Gilbert Hensley Jr. and wife Cynthia Denise Hensley, and Joni Ellyn Ford and husband Elmer Gene Ford Jr.; grandchildren Stanley English Pollard Jr. and wife Lona Pollard, Shannon Elaine Hamlet and husband Kelly Hamlet, Samantha Leah Beth Hensley, Chelsie Gené Ford-Garner and husband Andrew Garner, and Madison Nicolle Hensley; great-grandchildren Monica Hamlet, Tanner Pollard, Travis Hamlet, Tieler Hamlet, McKinley Hamlet, Ashley Rushing, Brynna Ryan Hensley, Broderick James Hensley and baby Garner; great-great grandchildren Rhett Scholar, Lyle and Drake Rushing and many beloved nieces and nephews. A celebration of life will take place post pandemic for this amazing couple. In lieu of flowers, please donate to St. Jude Hospital.

James Gilbert Hensley, Sr. (Gib), age 88, of Knoxville, Tennessee passed away peacefully and honorably in his home on January 11, 2021 with his family by his side. Gib was born on January 19, 1932 to parents James Ira Hensley and wife Ethel... View Obituary & Service Information

The family of James Gilbert Hensley, Sr (Gib) created this Life Tributes page to make it easy to share your memories.