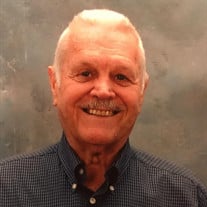 Dr. James "Jim" Henry Peck, 91, of Knoxville, Tennessee, formerly of Jefferson City, Tennessee, walked home with Jesus on February 1, 2021 from Park West Hospital surrounded by his family. He is preceded in death by his wife, Linnea Peck, of Knoxville; his mother and father, Nancy Livingstone and Harry Gilbert Peck; and his sister, Mary Jane Peoples, of Jefferson City, Tennessee. He is survived by his sister, Bette Brasher; sister and brother-in-law, Amy and Ray Torgerson; brother and sister-in-law, Edwin and Jackie Peck; son and daughter-in-law, Hank and Debbie Peck; daughter and son-in-law, Julie and Jack Mooney; daughter and son-in-law, Caroline and Matt Hill; son, John Peck; son and daughter-in-law, Brad and Amy Howard; daughter and son-in-law, Angie and Mark Brickley; granddaughter and grandson-in-law, Katie and Jack Little; granddaughter, Chelsea Hill; grandson, James Peck; granddaughter and grandson-in-law, Alexandra and Derek Clem; great-grandson, Kaden Peck; grandsons, Garrett Brickley and Matt Howard; granddaughters, Haley Brickley and Rachel Howard; and many grandnieces and grandnephews. Jim was a strong and fun-loving father; esteemed Korean War veteran; and proud alumnus of Carson-Newman College in Jefferson City, Tennessee and Howard College School of Pharmacy in Birmingham, Alabama. He served as a corpsman in the United States Navy on the hospital ship USS Repose, where he was honored to serve his country (and play on the 12th Naval District’s championship-winning football team in 1951). At Carson-Newman he played on the basketball and tennis teams, his love of tennis in particular bringing him new friendships and many summers spent at the Knoxville Racquet Club after he moved to Knoxville in 1959. In Knoxville, Jim was a faithful member and youth leader at Central Baptist Church of Bearden, where he also served for a time as a deacon and as chairman of the Finance Committee; he was a dedicated crew chief for SBC Tennessee Disaster Relief; and he was an ardent supporter of Lady Vols basketball, his love of all three taking him to far-flung places where he taught and laughed with young people, worked hard to make the world a better place, and shared love in actions big and small. Jim was also a lifelong member and supporter of the Boy Scouts of America, wherein he achieved his Eagle Scout as a youth and served as a District Commissioner and OA Adviser in his adult years. Through Scouting and beyond, his enthusiasm for the outdoors and service spilled over into his own adolescent avocations first, and then into the boyhood adventures of his son, Hank, and his friends. Many in Knoxville knew Jim as owner and head pharmacist of Long's Drug Store, where he served his community for more than sixty years. Perhaps the only thing for which he was better known was his notorious sense of humor: all who knew Jim know that he loved to laugh, and his mischievous spirit combined with his sharp wit never failed to keep us all on our toes. It wasn't unusual to find Jim playing pranks on his friends (or a complete stranger, as in an unsuspecting telemarketer, or his infamous, years-long pen pal, Geno Auriemma) - whether at age nine or eighty-nine - and the twinkle in his eye was invitation enough to sit back and enjoy the show. When it came to Jim Peck’s sneaky pranks, everyone was fair game. Jim loved reading US history (and saucy crime novels); a peanut butter and banana (and mayonnaise) sandwich on the Long's fountain grill; a well-timed (and off-color, any-brow) joke; and days spent outdoors in the East Tennessee mountains. He was steadfast and steady; he contained multitudes; and he was too grand to pin down on a page. Of all his life adventures, the one of which Jim was most proud was his family. Gathering for meals, making music and laughter, and painting the world full-color with the people he loved the most - this is what stoked that sparkle in Jim Peck's eye, and what keeps his spirit afire in all who know him even still. Jim's family will host a celebration of his life at Central Baptist Church of Bearden in Knoxville on Sunday, February 7 at 2:00 pm, officiated by family friends Dr. Harold Bryson and Elder Butch Wheeler. Due to concerns amid COVID-19 and to keep friends and family safe, masks are required, and seating will be socially distanced. A graveside service will follow at 3:30 pm at Edgewood Cemetery in Knoxville. In lieu of flowers, and to honor Jim's memory, contributions can be made to SBC Tennessee Disaster Relief, CORE Services of Northeast Tennessee, or Carson Newman University. Arrangements made by Rose Mortuary Mann Heritage Chapel. Online condolences may be made at www.rosemortuary.com. Services will be streamed live on the Rose Mortuary Mann Heritage Chapel Facebook page.

Dr. James "Jim" Henry Peck, 91, of Knoxville, Tennessee, formerly of Jefferson City, Tennessee, walked home with Jesus on February 1, 2021 from Park West Hospital surrounded by his family. He is preceded in death by his wife, Linnea Peck, of... View Obituary & Service Information

Send flowers to the Peck family.