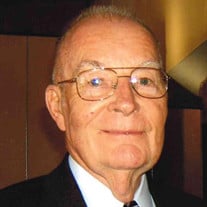 James Decator “Jim” Sturgeon, a lifelong Knoxvillian, went to be with his Lord on Tuesday, January 18, 2022. Born to Albert & Gladys Sturgeon on December 29, 1929, Jim was fond of saying he was a “paper boy” his entire life. What started as a part time job delivering newspapers for The Knoxville News Sentinel while a student at Knoxville HS, later became his passion and life-long vocation. In August of 1950 Jim joined the U.S. Army serving as an “Engineer” in the 8th Infantry division, specializing in airfield construction and maintenance, and achieving the rank of Corporal before returning home to Knoxville in August of 1953. During this three year period, Jim married his high school sweetheart and the love of his life, Jean (Jeanie) Reeves Sturgeon beginning the journey which would grow into a lasting legacy as a loving husband and father. Their family became complete with the birth of their daughters Susan Carole and Jana Lynne. In Sep 1953, he resumed his career with the News Sentinel as a district salesman. In a 35-year career which would stretch to December 1988 Jim served as a district manager and worked his way up to the role of News Sentinel City Supervisor. In his multiple roles he worked hard mentoring and developing his carriers as young people of character, determination, and integrity while ensuring they learned the value of hard work and thrift. Even after retirement, he got back into the “newspaper business” delivering copies of “The Knoxville Focus” to friends, family members, local businesses, and anyone he believed needed a paper and good conversation. His other pastime and hobby after retirement was maintaining a great lawn. Not only was “Jim the Grass Cutter” the captain of his yard but he constantly helped neighbors and family members maintain and improve their lawns. He was a member of Black Oak Heights Baptist Church for over 60 years, serving as a greater for over 20 of those years until his health prevented it. Jim is preceded in death by his parents, his siblings Ruth Miles and Joe Sturgeon, and his very special friends Ted and Dot Mitchell. Jim is survived by Jean Reeves Sturgeon (Jeanie), his wife of over 70 years; daughters and sons-in-law Carole and Ken Perry Mason, Jana and Jeff Kennedy; grandchildren and their spouses Sean Mason, Wendi and Rodney London, Michelle and Anthony Parker, Jennifer and Mike Lazarowicz, Jonathan and Amelia Kennedy; and great grandsons Noah Lazarowicz, Jonah Lazarowicz, and Hudson Kennedy. The family will receive friends from 1:00 pm – 3:00 pm at Rose Funeral & Cremation Broadway on Friday, January 21, 2022. Friends and family will meet following at 2:45 pm in the Mausoleum at Highland Memorial Cemetery for a 3:00 pm Celebration of Life service, officiated by Dr. Todd Stinnett. In lieu of flowers, donations may be made to Black Oak Heights Baptist Church, Knoxville, TN. An online obituary may be viewed and condolences made at www.rosefuneraltn.com.

The family of James "Jim" Decatur Sturgeon created this Life Tributes page to make it easy to share your memories.

Send flowers to the Sturgeon family.