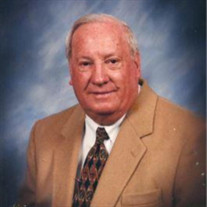 Knoxville - James Lynn Langford of Knoxville died on April 26, 2021, following his courageous battle with a lengthy illness. Born February 9, 1934, to Warner James and Mary Jones Langford, in Gibson County, Tennessee. Jim was preceded in death by his parents and younger brother. Jim is survived by his wonderful wife of 58 years, Barbara, daughters Sheila Langford Wyer (Patrick) of Greenville, SC and Denise Langford Woody (Jeff) of Atlanta, GA, grandson Hunter Wyer (Melissa), granddaughters Kasey Beem (Richard), Mary Kate Wyer, Emily and Elizabeth Woody, and great-grandchildren Luke and Addison. Known for his optimistic spirit, Jim graduated from the University of Memphis where he found true brotherhood in the Kappa Sigma Fraternity and obtained an advanced degree from Nova Southeastern University in Fort Lauderdale, FL. Jim was a Major in the United States Marine Corps, serving as the Facilities Engineering Officer of a Marine Helicopter Group in Vietnam, and was the recipient of numerous recognitions for his courage in combat including the Vietnamese Cross of Gallantry, and the Navy Commendation Medal. Prior to Vietnam Jim served in Japan, the Philippines, Taiwan, and on several U.S. bases. After Vietnam, Jim served 23 years as an executive with Ryder Systems, Inc. in Miami, FL prior to retiring in 1992. Jim belonged to Church Street United Methodist Church and the Pathfinders Sunday School. The Celebration of Life will be held at Church Street United Methodist Church at 11:30 am on May 3, 2021, followed by a committal service at East Tennessee Veterans Cemetery. In lieu of flowers, donations to made to the Church Street United Methodist Building Fund. Arrangements by Rose Funeral and Cremation - Mann. Online condolences may be made at www.rosefuneraltn.com.

Send flowers to the Langford family.