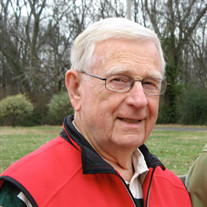 James Rule Lockett was born June 16, 1926 to Albert Lee and Bertha (Bun) Guinn Lockett in Solway, TN. He was the second of three boys. Soon after his birth the family moved to Knoxville, TN, where he spent the rest of his life. Growing up he enjoyed outdoor life, was active in the Boy Scouts, and also had a paper route when older. Jim graduated from Bearden High School in 1944. It was there, through a teacher who was a senior sponsor, Marie Lowry, that he met her daughter, Ralphine, whom he would one day marry. After graduating he enlisted in the Navy. He spent approximately 18 months in service in the Pacific, in and around Japan. Upon returning to Knoxville he attended the University of Tennessee and then the UT Dental School in Memphis. While in dental school he and Ralphine married on December 18, 1951. On October 29 the following year their son, Kim Alexander, was born. After dental school they returned to Knoxville and Jim began practicing dentistry at the V.A. hospital before starting his private practice. November 4, 1954, their second child, daughter Rinda Marie, was born, completing the family. Jim was active in Kiwanis Club, the dental association, and his church. He was a founding member of West Hills Baptist Church where he served as a deacon, sang in the choir, and taught Sunday School. Later the family attended and then became members of Cedar Springs Presbyterian Church where he served as an elder and also as clerk of the session for a while. Jim and Ralphine were active in home Bible studies and supported youth ministries. In 1991 after a brief battle with cancer Ralphine died. It was later in a church grief recovery class that Jim met Carmen Eros. They married October 2, 1993. Jim and Carmen enjoyed their life together traveling, doing church mission trips, and being active in the church.They also enjoyed art museums, the symphony, and time with friends and family. Jim also loved fishing and had several buddies he would go on fishing trips with. Jim was also involved in Bible Study Fellowship, leading bible studies, and mentoring younger men. After his retirement, he and several friends would also regularly pick up food from locations and take to the Second Harvest Food Bank. He also found time to work for his son, Kim, and make deliveries from his dental lab to the dentists in the area. He and Kim also enjoyed going to movies together or watching UT games on TV together. Jim was a generous, witty, helpful, and full of love. He was a great handy man, and could fix most anything. He loved his wife, his children and their spouses, his grandchildren and their spouses, and his great grandchildren. A celebration of Jim's life will take place on Sunday, May 2, 2021 at 3:00 pm at Cedar Springs Presbyterian Church. The family will receive friends following the service.

James Rule Lockett was born June 16, 1926 to Albert Lee and Bertha (Bun) Guinn Lockett in Solway, TN. He was the second of three boys. Soon after his birth the family moved to Knoxville, TN, where he spent the rest of his life. Growing up he... View Obituary & Service Information

The family of James Rule Lockett, DDS created this Life Tributes page to make it easy to share your memories.