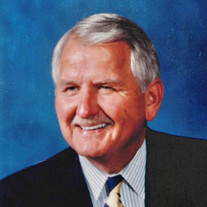 James Frederick (Fred) McBride, age 81, of Knoxville passed away Thursday, December 30, 2021 with his wife and son by his side. He was born January 23, 1940, to Shirley Ralph and Lydia Blanche McBride. Fred was a lifelong resident of Knoxville and a graduate of East High School, class of 1958. He was a member of Cokesbury UMC for over 50 years. He was a tough football player that played in the City-County All Star Game. Fred was a hard worker, at age 16, he started an apprenticeship with IBEW and became an Electrician. Fred was also a member of the Knoxville Fire Department and the 119th Air National Guard before starting his 47-year career as a Realtor. Throughout the years, Fred worked for David Wright Real Estate, R.M. Moore and Associates, and finally for Reality Executives for the past 38 years. He received many Real Estate awards of achievement. He married his loving wife Rebecca Nell (Mankel) McBride on April 23, 1966. Fred never met a stranger and was a loyal friend to many. He enjoyed working with people, selling houses and helping friends in need. Over the years Fred mentored and trained a countless number of people to be the best realtors they could be. Fred loved putting a deal together, traveling, pheasant hunting, spending time with family, driving around and watching all things sports. He also loved his mornings at McDonalds with his best friends. Fred had an infectious smile, a kind heart, a sense of humor, and the incredible gift of story telling. He will be missed by all who were blessed to know him. Fred was preceded in death by his parents S.R. and Blanche McBride; In-laws, Frank and Juanita Mankel, Brother-in-Law, Dick Eason; and Nephew, Brett Eason. He is survived by his wife of 55 years, Becky McBride; son, Nick McBride (Lisa); Grandson, Austin Altena; Great Grandson, Asher Altena; Sister, Jane Eason, Sister-in-Laws, Rosemary Kite and Diana Green, Nephews, Kevin Green (Debbie), Todd Eason (Christi), and Alex Kite; Niece, Katherine Carr (Benji); The family will receive friends at Cokesbury United Methodist Church on Wednesday, January 5, 2022, from 5:00 – 7:00 p.m. with a Memorial Service to follow. The service will be officiated by Rev. Charles Maynard and Rev. Rebekah Fetzer. There will be a private family burial at Edgewood Cemetery. In lieu of flowers, donations may be made to Susannah’s House at 923 Dameron Ave. NW, Knoxville, TN 37921, Susannah's House (susannahshouse.org) or to Sacred Grounds Hospice at 1120 Dry Gap Pike, Knoxville, TN 37918 (sacredgroundresidentialhospice.com). Rose Funeral and Cremation – Mann. Online condolences may be made at rosefuneraltn.com.

James Frederick (Fred) McBride, age 81, of Knoxville passed away Thursday, December 30, 2021 with his wife and son by his side. He was born January 23, 1940, to Shirley Ralph and Lydia Blanche McBride. Fred was a lifelong resident of Knoxville... View Obituary & Service Information

The family of James Frederick McBride created this Life Tributes page to make it easy to share your memories.

Send flowers to the McBride family.