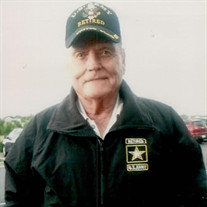 James Roscoe Mooney, 91, went to be with his Lord and Savior on Tuesday, October 5, 2021, at his home in Knoxville, Tennessee. He was born May 9, 1930, in Salem, Missouri. On August 30, 1950, he enlisted into the United States Army as a member of the Army Corp of Engineers. He served in Vietnam in 1966-1967. He was a member of the National Rifle Team and, in 1963, was the High Engineer Shooter in the President’s 100 Match where 3,300 marksmen competed. After 20.5 years of faithful service to the United States Army, on March 31, 1971, he retired as an E7/ Sergeant First Class. On May 11, 1965, he married Shirley Brewster in Knoxville, Tennessee. He is preceded in death by his parents, Raymond Mooney and Viola Botkin; brothers, Escoe Mooney, Otto Mooney, and Donnie Ray Mooney; sisters, Ann Nash, Vera Stillman, and Peggy Morris; and stepson Michael O’Dell. He is survived by his wife of 56 years, Shirley Brewster Mooney, two daughters, Pamela Cooper and Patricia Chadwick (James); grandchildren Ryan Chadwick, Emily Chadwick, Caleb Cooper, Mary Mallicoat (Tony), and Becky Fine (Kevin); great grandchildren Molly and Maggie Mallicoat and Cody and Corey Fine; brothers, Dee Mooney and Otis Botkin, Jr,; sisters, Betty Cook, Kay Gallagher, and Carol Fohey (Gerald); daughter-in-law Carolyn O’Dell and a host of nieces and nephews. The family would like to give special thanks to U.T. Hospice, V.A. of Knoxville, and Samantha Peevyhouse for their support during these times. Family will receive friends on Monday, October 11, 2021 from 5 to 7 p.m. at Meridian Baptist Church, 6513 Chapman Highway, Knoxville, TN 37920. Services to follow at 7 p.m. to be officiated by Rev. Dana Fachman, Rev. Donnie Ownby, and Jacob Brooks. The family will assemble at 8:00 a.m. at Meridian Baptist Church on Tuesday, October 12, 2021, and travel in procession to East Tennessee State Veterans Cemetery for an 8:30 am graveside service with full military honors. Funeral arrangements by Rose Funeral & Cremation Broadway. Online obituary may be viewed and condolences extended at www.rosefuneraltn.com.

The family of James Roscoe Mooney created this Life Tributes page to make it easy to share your memories.

James Roscoe Mooney, 91, went to be with his Lord and Savior...

Send flowers to the Mooney family.