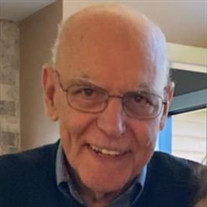 James Edwin Taylor, Jr., age 80, of Knoxville, Tennessee and husband of Trudy Taylor, went to be with Jesus Christ, his Lord and Savior on Monday, March 21, 2022. Jim was born June 10, 1941 in Paducah, Kentucky, the son of the late James Edwin Taylor, Sr. and Mary Margreat Parker Taylor. At age 19, Jim was appointed the state youth director for the Church of God in Tennessee. He was a graduate of East High School. After being the first person in his family to attend college and graduate from the University of Tennessee in 1964, he became a financial advisor, friend to many, and well-known figure in the local business community. However, his true love, discovered later in life, was serving in the mission field. After serving on many short-term mission trips, Jim helped build and finance a church and school in Riobamba, Ecuador for the Quichua people. Additionally, Jim and Trudy hosted missionaries from around the world and helped establish a Spanish speaking congregation at Park West Church. Jim lived by the 3 F's, as he called them: Faith, Family, and Friends. Jim Taylor is survived by his wife, Trudy: his daughter, Michelle of Duluth, GA; his son, Brad (Kathie) of Orange Park, FL; his daughter, Julie Watson (Geoff) of Canton, CT; his daughter Sarah Schwalb (Robert) of Rossville, TN; his son Daniel (Saray) of Knoxville, TN.; step-daughter Jennifer Davis (Jason) of Knoxville, TN.; step-daughter Julie Barber of Oak Ridge, TN.; step-son Tim Hissam (Hollie) of Knoxville, TN; 17 cherished grandchildren and one great-grandchild. In addition to his parents, he was preceded in death by his oldest son Terrell Stephen Taylor of Knoxville, TN; and beloved sister, Reba Taylor Stansberry (Ray) of Florence, KY. A Receiving of Friends for Mr. Taylor will be held from 4:00-7:00 Friday, March 25, 2022 at Park West Church followed by a Celebration of Life with Pastor Gerald McGinnis, officiating. Interment will be at 10 A.M. Saturday, March 26, 2022, at Pleasant Forest Cemetery, Concord Rd. Knoxville, Tennessee. In lieu of flowers, you can send donations to COG World Missions or to Global Infusion, Park West Church, Knoxville, TN. Arrangements by Rose Funeral and Cremation – Mann. Online condolences may be made at rosefuneraltn.com.

James Edwin Taylor, Jr., age 80, of Knoxville, Tennessee and husband of Trudy Taylor, went to be with Jesus Christ, his Lord and Savior on Monday, March 21, 2022. Jim was born June 10, 1941 in Paducah, Kentucky, the son of the late James Edwin... View Obituary & Service Information

Send flowers to the Taylor family.