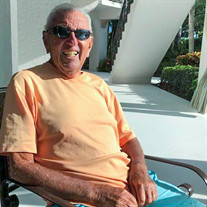 Jan Michael Fay peacefully passed away January 1st, 2022 at his home near Sarasota, a month shy of his 88th birthday. The first of Abe and Babe Fay’s two children, Jan was born in Knoxville, Tennessee on February 26th, 1934. He and his little sister Gail, grew up in East Knoxville, off Magnolia Avenue. Jan graduated from Knoxville High School in 1951. He later joined the U.S. Navy, where he soon learned he was better suited for a career in business over the military, often joking he spent the majority of “his time at sea” surrounded by sand on a naval base in the California desert. Jan married Hester Helton of Knoxville in 1959, and the couple soon made their way to New Orleans, where Jan joined Glazer Steel and Aluminum. All three of Jan’s children, Allison, Preston and Steven were born in New Orleans, where Jan developed the skills and experience that would lead him to return to Knoxville in 1968 with his family to start his own company, Fay Portable Buildings. From most humble beginnings, Jan began manufacturing and selling portable buildings for construction and residential use. He always used one of his own buildings as his office to illustrate the utility of his product. He often did the same for his other line of business, portable toilets. Indeed, as Jan’s company grew over the years, countless folks across East Tennessee had occasion to use one or more of the thousands of Jan’s porta-potties that dotted the hills and valleys from Knoxville to Bristol and from Crossville to Chattanooga. Jan married Carolyn Benedict in 1997, and the two have been inseparable life-mates ever since. Blessed with tenacity and unwavering focus, Jan was his best when he was most challenged. Already a great success with Fay Portables, Jan put it all on the line in his 50s to build a construction refuse hauling and landfill business. While most his age were looking for a way to retire, Jan double-downed on his new venture, and like most things Jan touched, it turned to gold. Within a few years, Jan had more than doubled the size of his company. He relished the opportunity to “play with the big boys,” always finding ways to outwit his much larger, publicly traded competition. Jan balanced his prosperity with generosity. He was there to help friends and family in need and he gave generously to more worthy causes than space allows. His ongoing loyalty and commitment to his family, friends and community is most noteworthy. In the winter of his life, Jan and Carolyn migrated south to the Sarasota-area. Jan spent countless hours fishing, hosting family and friends, and enjoying the beautiful view from his dock. He also became something of renown paint-by-numbers artist, “Done with a lot of love and a little talent,” as Jan was fond of saying. A number of Jan’s works adorn the walls of his favorite local restaurants. Never missing an opportunity to share his sharp wit and big smile, Jan was always quick to point out, “Those paintings will be worth a lot more when I’m gone.” Jan is survived by his loving wife, Carolyn Fay, his children, Allison, Preston and Steven Fay, his grandchildren, Kendal and Parker Fay, and Addison Leinart, and his sister, Gail Dressler. Services for Jan will be held at Rose Funeral & Cremation – Mann at 6200 Kingston Pike, Knoxville on Wed at 1 pm. For public safety, a video of the service will be posted on Facebook. For more information please see the funeral home’s Facebook page at: https://www.facebook.com/RoseMannHeritage/ In lieu of flowers, please make a donation to one of Jan’s and his parents’ favorite charities, East Tennessee Children’s Hospital. You can make a donation by visiting: https://www.etch.com/ways-to-give/make-a-donation/

Jan Michael Fay peacefully passed away January 1st, 2022 at his home near Sarasota, a month shy of his 88th birthday. The first of Abe and Babe Fay&#8217;s two children, Jan was born in Knoxville, Tennessee on February 26th, 1934. He and his... View Obituary & Service Information

Jan Michael Fay peacefully passed away January 1st, 2022 at his...

Send flowers to the Fay family.