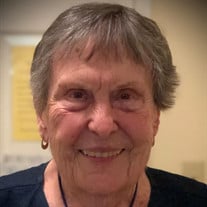 Bonvin, Jacqueline Marte, “Jackie”, age 99, born in NYC, died December 31, 2021. Jackie was a life long learner. She graduated high school from Ursuline Academy in 1939. She immediately attended Columbia Business Extension to become a Certified Professional Secretary. In her seventies, Jackie enrolled at UTK to study French Language and Business Administration. In 1939 Jackie started her career as a secretary for New York City law firms. In 1966 she accepted a secretarial job with IBM in White Plains, NY. In 1974 she transferred to IBM’s Knoxville branch to be near her family. She took early retirement from IBM in 1987. She returned to secretarial work at UT’s College of Law. She retired from UT in 1998. After the early death of her father in 1944 she assumed the role of sole breadwinner. She made a home with her mother in New York; Spokane, Washington; and Knoxville. In retirement, Jackie enjoyed an active life with the Alliance Française Knoxville (AFK), "Lunch Bunch" friends, browsing thrift stores, and the UTK retiree association. These events gave Jackie the opportunity to show her joy for fashion and travel. Jackie was a longtime member of Sacred Heart Catholic Church in Knoxville. She used her studies in French to assist as a translator for her church’s mission work in Haiti. Preceded in death by her parents Henri and Albertine Bonvin, brother Henri, and nephew Henri Edouard. Survived by sister-in-law Elizabeth, niece Janet, cousin Jeanne & Ben Sanders, Frank Vignand, Robert Ladau, and Brice Fisson. Funeral Mass on March 4th, 2022 at 4:00 pm at The Cathedral of the Most Sacred Heart, Knoxville, TN. Graveside service to follow on March 5th, 2022, Jackie’s 100th birthday, at Calvary Catholic Cemetery, Knoxville, TN. The family of Jackie expresses their gratitude to Geri Sellers and Eric McAnly for their friendship and dedication to Jackie’s care. Memorial contributions send to Cathedral of the Most Sacred Heart of Jesus, 711 S. Northshore Dr., Knoxville, TN 37919 and/or American Heart Association.

Send flowers to the Bonvin family.