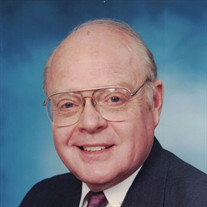 Dr. Jerry R. Johnson was born March 12, 1936 and went to be with his Lord and Savior, Thursday, August 12, 2021. Jerry was a friend to many, a man of God who dedicated his life to following Christ and training up many in the Word of God. His vocation was medicine where he compassionately tended to the physical needs of his patients for over thirty-five years, but his avocation was sharing locally and around the world about the only one who can heal us from the illness of sin, Christ Jesus and His work for us on the cross. A native of Knoxville, Tennessee, Jerry was born to Walter and Margaret Johnson and was preceded in death by both parents and sisters, Joy Montgomery and Judy Scott. Jerry grew up in Fountain City and attended Fountain City Elementary and Central High School. After three years of high school he was admitted to the University of Tennessee where he graduated with a Degree in Chemistry. He graduated third in his class from the University of Tennessee Medical School in Memphis as an OB/GYN specialist and subsequently did his Medical Residency at the University of Tennessee Hospital in Knoxville where he met his future wife, Linda Delozier, who was a nurse in the Labor & Delivery Unit. After marrying Linda in 1964, he served as an OB/GYN in the United States Air Force for two years and was stationed at Ramey Air Force Base in Puerto Rico. After his Air Force service, Jerry returned to Knoxville and practiced medicine at Fort Sanders until his retirement in 1996. Never retired from the Lord's work, Jerry served as President of the Board for Christian Academy of Knoxville (his second stint as he was a founding Board Member of CAK in 1977), an Ambassador for the Jesus Film Project, a Deacon at First Baptist Church of Concord, and discipled many men from all walks of life in how to live for Christ (John 15:5). Jerry was a doting husband of 57 years to Linda Johnson and the loving father to a daughter, Amy Graham (John Mark) of Birmingham, Alabama, and two sons, David Johnson (Jill) and Alan Johnson of Knoxville. He has 9 grandchildren: Cooper, Mary Lawson, Mimi, Reagan, and Hutton Johnson, and John Will, Samuel, Lydia, and Rebecca Graham that he loved dearly. A Memorial Service will be held at First Baptist Concord Church on Saturday, September 11, 2021 at 3:00 p.m. In lieu of flowers, donations to the Jesus Film Project (jesusfilm.org) are requested. Under "Special Handling Instructions," please designate for the Jesus Film Project - Uganda. Online condolences may be made at www.rosefuneraltn.com. The service livestream can be viewed at https://www.facebook.com/RoseMannHeritage/.

Dr. Jerry R. Johnson was born March 12, 1936 and went to be with his Lord and Savior, Thursday, August 12, 2021. Jerry was a friend to many, a man of God who dedicated his life to following Christ and training up many in the Word of God. His... View Obituary & Service Information

The family of Dr. Jerry R. Johnson created this Life Tributes page to make it easy to share your memories.