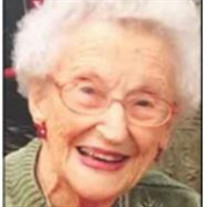 KNOXVILLE - Joanna Smith Venable, age 103, passed away peacefully at her home surrounded by her family on Tuesday, January 19, 2021. Born on April 8, 1917, in Morristown, Tennessee, to Rev. Lewis F. Smith and Priscilla Hartman Smith, Joanna was the youngest of seven children. After attending Tusculum College, Joanna moved to Knoxville in the late 1930s to work for TVA. Soon after arriving she met her future husband, Nelson Venable, at Fort Sanders Presbyterian Church. Following service in the Pacific during WWII, Nelson arrived home on D-Day (June 6,1944) and they were married on June 10,1944. Nelson became a well-respected title attorney and together they raised 4 daughters and had an unbelievable impact on the lives of so many, not only in Knoxville, but around the world. Highly regarded for their unselfish love of family, church and community, Joanna and Nelson were always doing for others ahead of themselves. After Nelson’s death in 1982, Joanna continued to be a vibrant example of love to all she met. She had inexhaustible energy, even delivering Mobile Meals when she was in her 90’s. Up until the week preceding her death, although in great pain, Joanna was able to be up and about. Though completely exhausted physically, her mind was sharp until her end. Joanna was preceded in death by her husband and infant daughter, her parents, four brothers and two sisters. She is survived by daughters Linda (Bill) Nix, Martha (John) Bradley, Barbara Venable & Rebecca (Jim) Ferguson; granddaughters Anne (Dee) Anderson, Lauren (Don) DeVore, Kristin (Brad) Wormsley, Emily (Matt) Sipes, Sarah (Brandon) Ward, Jenny (Ryand) Johnson & Joanna (Rhett) Lankford. When Joanna became a great grandmother for the 1st time, she said she wanted to be called “Greaty.” There are now 15 great grandchildren who are known as “Greaty’s Greats!” - Carter & Grissim Anderson; Kate & Wyatt DeVore; Ryan (Caitlin) & Holly Wormsley; Cleo & Rita Sipes; Thompson & Anderson Ward; Noah, Oakley & Josie Johnson; and William & Bennett Lankford. Joanna is also survived by many near and dear nieces and nephews and their families – Priscilla Millard, Mary Grainger, Blake Sullenberger, Debbie Sullenberger-Johnston, Mary Fraker, Suzy Deaton, Sam, Rick, Ronny Venable and the recently deceased Frank Venable. To honor Joanna, contributions may be sent to First United Methodist Church, 3316 Kingston Pike, Knoxville, TN 37919 or Mobile Meals Program, PO Box 51650, Knoxville, TN 37950-1650. Joanna is now singing in the Heavenly Choir. Rejoice with her family with prayers of thanksgiving for a beautiful lady and a life well-lived. Arrangements by Rose Mortuary Mann Heritage Chapel. Online condolences may be made at www.rosemortuary.com

Send flowers to the Venable family.