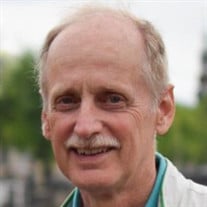 John Ernest Erpenbach, M.D. passed away peacefully on March 16, 2022 at his home from complications of Alzheimer’s and Parkinson’s diseases. He was surrounded by his loving family at the time of his death. He was the son of the late Jerome Joseph and Dorothy Falteisek Erpenbach and was born November 23, 1950 in Chattanooga, TN. He earned his Medical Degree from the University of Tennessee Memphis in 1975, completed his residency in Anesthesiology at Vanderbilt University in 1984, and residency in Family Practice at the University of Tennessee Knoxville in 1998. He held clinical and academic positions at Vanderbilt University Hospital, UTK Medical Center, and was on staff at Park West and East Tennessee Children’s Hospital. He finished his medical career at the VA Outpatient Clinic. He served as a Flight Surgeon for the 82nd Airborne Division from 1977 to 1980. He continued serving in the Tennessee Army National Guard until retirement with the rank of Colonel in 2003. He was active in Addiction Medicine as a consultant, instructor, and served on the Board of Directors for Cornerstone of Recovery from 1990 to 2021. Everyone who knew John loved his one of a kind wit and dry sense of humor. When he was not working, John enjoyed traveling around the country and the world with his family. In his free time, John was busy with the house and landscaping projects and using new tools and gadgets. He is survived by his loving wife of 28 years, Natasha and daughter Alexandra (Sasha), brothers Jerome J. Erpenbach, Jr and wife Suzanne, James D. Erpenbach D.D.S. and wife Gwen, as well as nephews Jonathan, Michael, David, Christopher, Michael A. and niece Katherine Erpenbach. The family wishes to express their heartfelt gratitude to John’s devoted caregivers, Cheryl Garrett and Ernest Pulliam, for their kindness and loving care allowing John to remain at home. We also express special thanks to the staff of Smoky Mountain Hospice and Home Instead. In lieu of flowers, the family requests donations in John’s memory to Tennessee Memory Disorders Foundation (TMDF.ORG) at Genesis Neuroscience Clinic. The family will receive friends Friday, March 18 from 5:00 to 8:00 pm at Rose Funeral and Cremation - Mann. Funeral service will be Saturday, March 19 at 2:00 p.m. at All Saints Catholic Church with Father Doug Owens officiating.

John Ernest Erpenbach, M.D. passed away peacefully on March 16, 2022 at his home from complications of Alzheimer&#8217;s and Parkinson&#8217;s diseases. He was surrounded by his loving family at the time of his death. He was the son of the late... View Obituary & Service Information

Send flowers to the Erpenbach family.