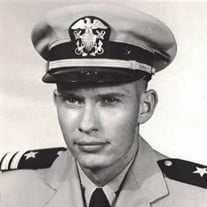 John Harold Lunn, age 83 of Knoxville, passed away peacefully Friday, March 5, 2021. John was a Protestant, and was a Master Mason of Cherokee Lodge #728. He is preceded in death by his father and mother, Harold H. Lunn and Eva Coben Lunn. John is survived by his loving wife of 60 years, Phyllis Walls Lunn; son and daughter-in-law: Robert (Chip) Lunn and Angela of Chandler, AZ; daughter and son-in-law: Melissa Lunn Sykes and Kenny of Rockwood, TN; grandchildren: Erin McAdams of Mobile, AL; Benjamin Lunn of Las Vegas, NV; Elysha Goldstein of League City, TX; John Sykes of Knoxville, TN, and Virginia Wooten of Charleston, TN; great-grandchildren: Levi McAdams, Harvest Lunn, Paislee, Emma McAdams, and Madelyn Goldstein; sister, Marilyn Price of Knoxville, TN. John was 1955 graduate of Oak Ridge High School. The only thing he ever dreamt of doing as a boy was to fly! Seeing the U.S. Navy as an avenue to pursue his dream of flying, he completed three years of college at the University of Tennessee Knoxville before he was allowed enrollment in the Naval Aviation Cadet Program in Pensacola, Florida, July 1958. Upon graduation of this program he was commissioned an Ensign in the Naval Reserves and earned his Naval wings and the title, Naval Aviator. He and Phyllis were married in 1960, at the Naval Air Station in Kingsville, TX, then sent off to his first assignment at Atsugi Naval Air Station, Japan. Upon completing his tour of duty in Japan, he was assigned to the Naval Air Station Corpus Christi, TX to become a flight instructor for the Navy. It was during this time that many of the large commercial airline carriers began recruiting talented service members in the fast expanding commercial aviation industry. He decided to leave the service in 1965, was given an Honorable Discharge, and joined Braniff Airlines. Aside from his initial flying duties John developed the Braniff Airlines flight engineer training program. When the airlines went bankrupt in 1982, he was fortunate enough to join a rapidly expanding Piedmont Airlines and moved to High Point, NC. He and Phyllis moved back to the Knoxville area once again in 1989. Piedmont was acquired and merged with US Air in 1989, where John finished his career as an airline pilot, in addition helped developed the USAir Fokker F100 Flight training program, and was also a Check Airman attaining over 18,000 hours in his flying career. John so enjoyed fishing and boating with his family and grandchildren, as well as being an avid hunter. He also like to hike in the Great Smokey Mountains. He and Phyllis spent the last two decades RV'ng. On-line condolences may be extended at www.rosemortuary.com; Arrangements by Rose Mortuary Mann Heritage Chapel.

John Harold Lunn, age 83 of Knoxville, passed away peacefully Friday, March 5, 2021. John was a Protestant, and was a Master Mason of Cherokee Lodge #728. He is preceded in death by his father and mother, Harold H. Lunn and Eva Coben Lunn. John... View Obituary & Service Information

The family of John Harold Lunn created this Life Tributes page to make it easy to share your memories.

Send flowers to the Lunn family.