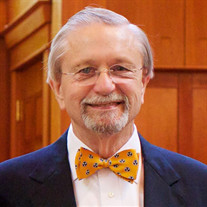 Dr. John Roberts Maddox, Jr., 83, passed away peacefully in his sleep Monday, May 21, 2018 in his room at Northshore Senior Center in Knoxville, Tennessee. Dr. Maddox was born on September 21, 1934 in Calhoun, Tennessee. He called Knoxville home for the majority of his life. He is preceded in death by his parents, John Roberts Maddox, Sr. and Fannie Taylor Maddox, and by his daughter, Holly Sue Maddox. He is survived by his sister, Ruth Anne Maddox Myers (Melvin) of Calhoun; Lisa Maddox-Baker of Knoxville, the mother of his son, Mark Maddox (Patricia) of Gig Harbor, WA; Margaret Maddox of Knoxville, the mother of his sons, Kevin Maddox of Asheville, NC; Brian Maddox (Jessica) of Los Angeles, CA; and Michael Maddox (Suma) of New Orleans, LA. He dearly loved his four grandchildren, Brianna Maddox of Gig Harbor; and Rainer, Rivers, and Kingston Maddox of New Orleans. Dr. Maddox was an alumnus of Calhoun High School, attended The University of Tennessee at Knoxville, and graduated from The University of Tennessee College of Medicine in Memphis. He was a proud veteran of the United States Army, in which he served as a doctor, achieving the rank of Lieutenant Colonel before being honorably discharged. Dr. Maddox practiced General Pediatric Surgery at East Tennessee Children’s Hospital for almost forty years, but it was his patients, not his practice, to whom he dedicated so much of his life. Over the course of his career, Dr. Maddox impacted the lives of tens of thousands of sick children, their parents, and their families. So valued was Dr. Maddox’s contribution to the care of his patients that, upon his retirement in 2003, Children’s Hospital named a wing of its operating facilities after him in honorarium. The family will receive friends and family from 1:00 pm to 3:00 pm on Saturday, May 26, 2018 at Rose Mortuary Mann Heritage Chapel, 6200 Kingston Pike, Knoxville, TN 37919, and again from 2:00 to 3:00pm on Sunday, May 27, 2018 at Calhoun United Methodist Church, 820 TN-163, Calhoun, TN 37309 with the funeral to follow immediately at Calhoun United Methodist. Burial will be in the Calhoun Cemetery. In lieu of flowers, contributions may be sent to East Tennessee Children’s Hospital, or the charity of your choice.

Dr. John Roberts Maddox, Jr., 83, passed away peacefully in his sleep Monday, May 21, 2018 in his room at Northshore Senior Center in Knoxville, Tennessee. Dr. Maddox was born on September 21, 1934 in Calhoun, Tennessee. He called Knoxville... View Obituary & Service Information

The family of Dr. John Roberts Maddox created this Life Tributes page to make it easy to share your memories.

Send flowers to the Maddox family.