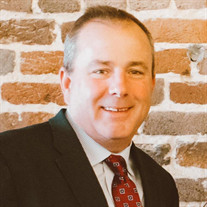 John Landis Speed passed away unexpectedly of a heart attack on Saturday, June 5, 2021. John was a loving husband and father of two grown boys. After growing up in Connecticut, John moved to Nashville his junior year of high school and afterwards attended UT Knoxville. While attending UT he was a member and president of Beta Theta Pi fraternity, developing and showing his excellent leadership skills. During his college years he also began his career in the restaurant industry at the Copper Cellar. He loved the fast-paced atmosphere and soon found himself working as kitchen manager. (It was during his Copper Cellar days that he met and fell in love with Rhoni while she was working as a hostess.) He left the Copper Cellar to help re-open the Bistro at the Bijou, developing the menu and working as kitchen manager. When John’s father-in-law passed away, John helped run Schriver’s, the family’s clothing business, until it closed in 1994. With a young family to raise, John found himself in a new career working in sales. He soon would find a home with Shoffner Mechanical Service where he enjoyed a long employment as sales manager and vice president of the service division. After several years at Shoffner, John joined the team at Interstate Mechanical Service in a leadership role, running and growing the service company as the general manager. He was most proud of seeing the growth in the company over the past 4 years and especially proud of the team members he worked with; striving to create an environment where everyone felt valued and appreciated. John’s work was always very important to him and something he took great pride in no matter the position he held. John was a man who lit up a room with his infectious smile and dry-witted humor. He truly lived life in the moment and made the most of every day. This was evidenced by his enjoyment of good food, local beer, attending concerts – especially the Dave Matthews Band, playing Pickleball, bocce ball, being with friends, and riding his bike. Always open to new endeavors and taking pride in his work, John could also be found in his garden tending to his plants, riding his John Deere in pursuit of having the best lawn in the neighborhood, and most recently (his Covid hobby, he called it) painting abstract works of art. Those close to him knew that he was an early riser (way before the sun was up) and enjoyed that time reading books on WWll and sipping black coffee – soon after going into high gear until the end of the day, where you could find him on his deck with a cigar and scotch in hand. He was a perpetual optimist, always seeing the good in every situation. Simply put, John was a good man that loved abundantly and was loved deeply. In their 33 years of marriage, John and his wife, Rhoni, focused on raising their two successful boys and growing their own careers. In recent times, empty-nesters John and Rhoni found enjoyment cooking delicious meals together, enjoying time with their grand-dogs, exploring new places, finding the best restaurants in the area but mostly having extra time to spend together as a couple. What John enjoyed the most however, was being surrounded by his children and wife while enjoying a good meal and laughs. John is survived by his loving wife, Rhoni Miller Speed, his son Sam Speed (Aimee Belt) and son Alex Speed (Brittany Speed), mother-in-law Judith Miller, his brother Rob Speed (JoAnne), niece Casey, nephew Rob, nephew Matt(Ben), sister Allison Jensen (Dave), niece Laura, niece Hannah (John), sister Andrea Wing (Tom), nephew Peter (Lisa), daughter Grace, niece Elizabeth, sister-in-law Melissa Feinbaum (Ron), niece Rachael, sister-in-law Erin Blankinship (Paul), nephew Miller, cousins Henry Landis (MaryEllen) and Emily Landis Walker, grand-dogs Lily, Jacks, Nimmy, George, countless friends and his co-workers at Interstate Mechanical Service. John was preceded in death by his mother, Pat Speed, father, Robert Speed, and father-in-law, Marvin Miller. Donations may be made to The Bijou Theater, Joy of Music, Second Harvest, Mobile Meals, or any charity of your choosing. A Celebration of John’s life will be held at 3:00 PM Friday, June 11, 2021 at Rose Funeral and Cremation Mann Chapel with the family receiving friends immediately following the service. Online condolences may be sent to www.rosefuneraltn.com. Arrangements provided Rose Funeral and Cremation Mann Chapel. Services will be streamed live at www.facebook.com/RoseMannHeritage.

John Landis Speed passed away unexpectedly of a heart attack on Saturday, June 5, 2021. John was a loving husband and father of two grown boys. After growing up in Connecticut, John moved to Nashville his junior year of high school and afterwards... View Obituary & Service Information

John Landis Speed passed away unexpectedly of a heart attack...

Send flowers to the Speed family.