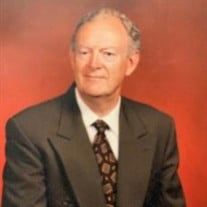 WILLIAMS, JOHN SANDERS GILBERT- age 89 of Knoxville, died peacefully on December 15, 2020 at Fort Sanders Hospital after two falls, hip surgery and coronavirus. John was born on November 15, 1931 in DuQuoin, Illinois, near his maternal grandparents’ home. He was a member of the Erin Presbyterian Church in Knoxville. John graduated Knoxville High School in 1949 and matriculated at University of Tennessee in the School of Engineering in 1951. In 1952, John enlisted in the Army to serve during the Korean Conflict. Due to blindness in one eye, John was not eligible for combat but was accepted because of drafting skills he developed at UT. These skills were soon put to use at the Pentagon transferring aerial photography to maps and crafting charts and graphs. He was honorably discharged as a Corporal in 1954. That same year, John returned to Knoxville and UT, graduating with a B.S. in mechanical engineering in 1957. Though he was offered more lucrative positions in Connecticut, he decided to remain near his beloved family in Tennessee and to continue his service for the nation, by “working on the space race.” He and his first wife, Sue Anderson, and his daughter Jennifer Jon Williams, relocated to Tullahoma, Tennessee where he was employed by ARO, Inc. at Arnold Engineering Development Center (AEDC) to test rocket parts for NASA and the Air Force from 1957 until 1971. Carl Edward Parsons Williams, his son, was born in 1961. During his AEDC employment, he attended evening classes at the University of Tennessee Space Institute in Tullahoma, earning a master’s degree in 1967 which focused on combustion engine properties. In 1971, John moved back to Knoxville to work for the Tennessee Valley Authority (TVA) with a specialty in nuclear energy. John retired in 1990, and began work for Lockheed Martin Energy Systems in Oak Ridge from 1990 to 1996. During the 1980s and 90s John served as Chair on a subcommittee of the National Regulatory Committee, preparing Codes and Standards for Operation and Maintenance of Nuclear Power Plants. He was a member of the American Society of Mechanical Engineers from 1976 until retirement, a member of University of Tennessee President’s Club, and the Beaver Brook Golf and Country Club where he served as President. John was also an avid golfer. He loved travelling to Turkey and Kenya, where his step-daughter, Melissa Coskuner, was working for the U.S. State Department. He also relished his trips to Naples, Florida where he and his beloved friend, Beverly Kreis Owen, “wintered” every year until Beverly passed in 2019. John was proud to say he had worked most of his life, first as a paperboy for the Knoxville News Sentinel and then for Grey Knox Marble Company after graduating high school. He also was fond of uttering aphorisms, such as “Success is 40% skill and 60% sweat.” Frequently he would remark, “Half of being smart is knowing what you’re dumb at.” He was an enthusiastic raconteur of jokes, both short ones and long-winded, that entertained many of his friends and family. As the jokes slowly disappeared from his memory, John still remained socially active during his last year and a half with his new and old community of friends at Parkview West Senior Living. John was preceded in death by his parents, Clarice Parsons Williams and Earl Baxter Williams, sisters Patricia Williams Tarver, and Sandra Williams Bull, his wife Kay Hays Egbert Williams, and his beloved friend Beverly Kreis Owen. He is survived by the many who loved him: his daughter, Professor Jennifer Jon Williams Nourse, Ph.D., (and Otfried) of Richmond, VA and grandchildren Larsen Gable of Brooklyn, New York and Grace Gable of Richmond, VA.; his son, Carl E.P. Williams (and Dianne) of Spartanburg, SC and grandchildren, Kelly “Eddie” Williams of Richmond, VA and Margaret Williams, RN of Nashville, TN.; his brother-in-law, Thomas Love Tarver, Jr., nephews Thomas L. Tarver III of Austin, TX, John Mark Tarver of Nashville, TN and his niece, Kathleen Archer Thompson.; by his step-children, Melissa Egbert Coskuner of Sarasota, FL and Bogotá, Columbia; Thomas L. Egbert, Sr. of Fairhope, AL, Daniel M. Egbert of Sydney, Australia, Charles T. Egbert, Jr. of Columbus, OH, and multiple step-grandchildren. Additionally, John is survived by Beverly’s daughter, Brooks Baker Eggers (and David). A funeral will be postponed until mid-summer to ensure no one’s health is jeopardized by the coronavirus. Those wishing to be notified when funeral date is established, please contact Rose-Mann Mortuary or email [email protected]

Send flowers to the Williams family.