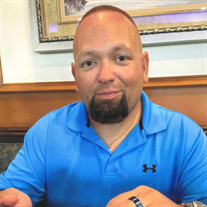 Joshua James Reynolds cast his final net as he peacefully entered into Heaven, September 25, 2020. Born March 20, 1980. A “Thursday Child”, Josh entered this world as an only child of Susie and Thomas Reynolds. A blonde haired, brown eyed, baby boy. Described as a “Gift from God”, by his loving Mom. Joshua was a restless boy, walking before he was crawling. As a child, Joshua loved swimming, camping and all things Christmas. The ocean was always calling Joshua, as he spent many summers at Pawley’s Island, South Carolina. It is at Pawley’s Island that Josh formed his most meaningful, lifelong friendships, a passion for fishing, and musical talent in where he found his true peace. Josh was loved passionately and unconditionally. He taught us all to never judge others, as we may never know the trials and tribulations that others may be going through at any given time. Josh was an addict. As a surviving Mama, please check on your children, their friends and the people that you love. Joshua believed that you should live, love, be loved and be at peace within yourself. Joshua was just “on loan” from God. For a mother, I knew this, for he was always meant to be mine. Described as an “Old Soul”, with a knack for fixing things with his handiwork, there wasn’t a job too big for Joshua. His Mom joins his friends with fond admiration for his ability and determination to fix cars, boats, fishing reels, etc. Quoted in his favorite songs, Josh spent his final months attempting to “build a better boat”. Joshua is survived by his beloved mother, He was dearly loved and will be greatly missed and to that end, I hope that you are now “Standing on a peak and I will say my goodbyes to thee”. I know that you are on a peaceful island son, beneath the Gulf Moon. All my love, Mom. Susie Reynolds of Knoxville, TN. It brings his Mom great peace to know that Josh is resting in Heaven now, reunited with his best friend and Golden Retriever, Jameson by his side. He was preceded in death by his father, Thomas Reynolds; grandparents, Jack and Phyllis Capps of Luttrell, TN and Betty and Jack Reynolds of Alcoa, TN; beloved cousins, Sandy Reynolds of Louisville, TN and Bobby Ray Capps, Jr of Luttrell, TN. A very special thank you to Leslie and Wallin Myers for their love and strength. Private services were held. Online condolences may be sent to www.rosemortuary.com

Joshua James Reynolds cast his final net as he peacefully entered into Heaven, September 25, 2020. Born March 20, 1980. A &#8220;Thursday Child&#8221;, Josh entered this world as an only child of Susie and Thomas Reynolds. A blonde haired, brown... View Obituary & Service Information

The family of Joshua James Reynolds created this Life Tributes page to make it easy to share your memories.

Send flowers to the Reynolds family.