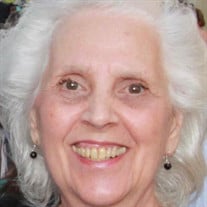 Joyce “Jo” Mabry Busby was a devoted mother and Grammy. Her spirit left this world on September 23, 2021, at age 79 due to complications from diabetes. She was born to Ned and Juanita Mabry on February 8, 1942, in Salisbury, N.C. After graduating from high school, Jo attended Appalachian State University and later attended UNC Charlotte to earn a Master’s Degree in Human Development and Learning. She worked most of her career as a paralegal, recently for the U.S. Attorney’s Office for the Eastern District of Tennessee until she retired. Jo loved spending time with her grandchildren, Jackson, Mabry, Joseph and Ben. She was a skilled piano player and had a beautiful voice. She was always there with advice and support through any crisis. She is survived by her son J. Scott Busby and daughter-in-law, Amanda Busby, of Knoxville, TN, sister, Sharon Griffin and brother-in-law, Ronnie Griffin, of Kannapolis, NC, brother, Steve Mabry of China Grove, NC, and grandchildren, Jackson Busby, Mabry Busby, Joseph Belew, and Ben Busby, all of Knoxville, TN. Jo believed “The body is only the vehicle ever of that spirit and soul that waft through all times and ever remain the same.” Her spirit will remain with us always. A celebration of life will be scheduled at a later date. An online obituary may be viewed and condolences made at www.rosefuneraltn.com.

Joyce “Jo” Mabry Busby was a devoted mother and Grammy. Her spirit...

Send flowers to the Busby family.