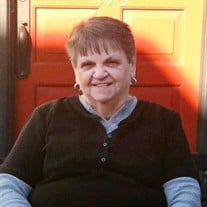 Judy Margaret (Garrett) Hester, 76, of Knoxville, TN, went home to Jesus on March 31, 2021. Judy is preceded in death by her son, Alan Matthew Hester; parents William and Helen Garrett; sister Sally Garrett Shelton and brother David Garrett. Judy was born in Landville, West Virginia on August 31, 1944. Judy graduated from Point Pleasant High School (WV) in May of 1962. She went on to follow her sister Sally and graduate from Saint Mary's School of Nursing (WV) in September of 1966. Judy worked as a Registered Nurse (RN) at Saint Mary’s Hospital after graduation, before moving to Charlottesville, VA in 1967 to work at the University of Virginia Hospital. It was there that she met Gary Hester. They married on January 18, 1969. Son Alan was born in 1972 and daughter Karen in 1974. The Hester family moved to Knoxville in November of 1974, where Judy began a long career as an RN at Fort Sanders Regional Medical Center. The family has been longtime members of West Park Baptist Church, where Judy faithfully served and enjoyed singing in the choir. Judy loved traveling, reading books, shopping and her beloved cat Whiskers, however, Judy was most happy when surrounded by her family and loved ones. Survivors include husband Gary Hester; daughter, Karen Elizabeth (Hester) Garland of Atlanta, GA; brothers Richard (Barbara, dec.) Garrett of Ravenswood, WV and James (Martha) Garrett of Huntington, WV, along with several nieces and nephews. A Celebration of Life Service will be held on Tuesday, April 6, 2021 at West Park Baptist Church, 8833 Middlebrook Pike, Knoxville, TN 37923. The family will receive friends from 6pm - 7pm, with service immediately following at 7pm. The Reverend Sam Polson will officiate. Arrangements by Rose Funeral and Cremation - Mann. Online condolences may be made at www.rosefuneraltn.com.

Send flowers to the Hester family.