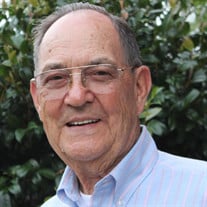 Larry F. Waldroup of Knoxville passed from this life to his home in heaven on Thursday, September 30, 2021 at the age of 97. Larry grew up in Dickenson County, Virginia and later in Coeburn, Virginia where he met his wife of 74 years, Mary Higgins. Larry entered the Army in June of 1943 and served in Company C of the 193rd Tank Battalion in the Pacific. After returning home in 1946, Mary and Larry were married. They eventually moved to Pennington Gap, Virginia where they began raising their family. Larry and his brother Glenn operated Larry’s Esso in Pennington, and Larry later worked as a truck driver. In 1965, the family moved to Knoxville. After holding various jobs, Larry entered school and became an HVAC technician, and subsequently worked at the University of Tennessee Knoxville campus until 1989, when he retired. Larry and Mary were both long-time members of Grace Community Church in Fountain City. Larry is remembered for his sweet spirit. He was a kind and gentle man whose joy included being with his extended family. Larry was a man of faith and is remembered by many for his prayers with and for his friends and family. Larry’s family would like to express their thanks to his caregivers over the last few years: the SCHAAS staff, the Morning Pointe at Powell staff, and the staff at NHC HealthCare Knoxville. Larry is preceded in death by his wife, Mary Waldroup; parents Astor V. and Alice (Cable) Waldroup; brother A.V. Waldroup, Jr. (Ted); sisters Dorothy Robinette, Ernestine Love, and Nina Wise; brothers-in-law “Skinner” Robinette, John Love, Ernie Jones, Bill Nunley, Delmus Higgins, Harold Higgins, C.C. Higgins, Jr.; and sisters-in-law Helen Higgins and Nina Higgins. He is survived by daughter Patricia Payne and her husband, Tom Payne; son Larry D. Waldroup and his husband Christopher Laine; granddaughter Krista Payne and her husband Rick Wasserman; brother Glenn Waldroup and his wife Jewel; sisters Jody Nunley and Janet Jones; brothers-in-law Dan Higgins and Walter Wise; sister-in-law Nancy Higgins; and a number of nieces and nephews. Larry’s and his beloved wife Mary’s ashes will be interred Tuesday, October 19, 2021 at 11:00 am in a brief ceremony with military honors at Greenwood Cemetery in Knoxville. A Celebration of Life will be planned for a later date. In lieu of flowers, please consider donations to Knox County Mobile Meals. Online condolences may be extended at www.rosefuneraltn.com

Larry F. Waldroup of Knoxville passed from this life to his home in heaven on Thursday, September 30, 2021 at the age of 97. Larry grew up in Dickenson County, Virginia and later in Coeburn, Virginia where he met his wife of 74 years, Mary Higgins.... View Obituary & Service Information

The family of Larry F. Waldroup created this Life Tributes page to make it easy to share your memories.

Larry F. Waldroup of Knoxville passed from this life to his home...

Send flowers to the Waldroup family.