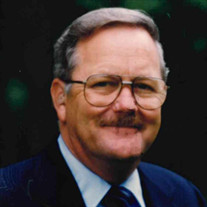 Layfield Lynn Lamb passed peacefully away into the arms of the Lord on May 10, 2021. Lynn was born on November 24, 1937 in Knoxville, Tennessee. After graduating from Central High School in 1955 he joined the Air Force and participated in the atomic tests in the Pacific. Upon discharge from the Air Force he joined Vitro Weapons Systems in Port St. Joe, Florida and in 1960 accepted a position as Technical Representative for Emerton in Germany. Upon returning from Germany, Lynn worked for Boeing and the Minuteman system in Seattle and Great Fall, Montana and in 1963 joined Hycon Mfg Co. in California and Washington D.C. until transferring to federal service with the Department of Navy. He retired from the Department of Navy in 1992 after thirty years of service. During his career with the Navy Department Lynn held positions at Naval Sea Systems Command in Washington D.C. and Naval Weapons Station in Charleston, SC where he served as director of five departments before finishing his career back at NAVSEA Headquarters where he received the Navy’s two highest civilian awards. Lynn was an avid amateur radio operator and was always ready to help new hams or those who needed assistance with equipment towers. His interest was mainly DX and contesting but in later years he developed a passion for QRP. Lynn was inducted into the DX Hall of Fame in 2010. He was a member of the first ARRL DX Advisory Committee, life member of ARRL, CQ, INDEXA, life member and hall of fame member of UTARC, founding officer of the National Association, Tennessee Contest Group and co-founder of SEDCO (Southeast DX and Contest Organization). His main interest in radio communication was to promote fellowship with hams around the world. His last call was W4NL but other calls were W4HZI, W3BWZ, DL5FP, K7UMZ, K6AXX, and 8P9GN. Lynn was preceded in death by son, Steven W. Lamb; parents, Layfield W. and Betty Lamb; sister, Joan Gayle Lamb; brother, George Lamb; and uncle and radio mentor, Carl Lamb. He is survived by his loving wife of sixty-four years, Rosie; son, Mark (Maggie) Lamb; grandson, Dawson Lamb; and extended family and many good friends. Private services are planned. IN lieu of flowers the family request you love one another and pray for peace in our country and world.

Layfield Lynn Lamb passed peacefully away into the arms of the Lord on May 10, 2021. Lynn was born on November 24, 1937 in Knoxville, Tennessee. After graduating from Central High School in 1955 he joined the Air Force and participated in the... View Obituary & Service Information

The family of Layfield Lynn Lamb created this Life Tributes page to make it easy to share your memories.

Layfield Lynn Lamb passed peacefully away into the arms of the...

Send flowers to the Lamb family.