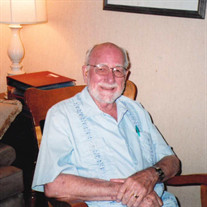 Leander Floyd Johnson, Ph. D., age 94 of Knoxville, passed away Saturday, December 12, 2020. He was born in Lecompte, Louisiana on August 3, 1926. He served in the U. S. Navy in 1945-46 in the Asiatic-Pacific area. He attended the University of Louisiana-Lafayette and received a B. S. degree in Biology in 1948. After a year as a science teacher at Urania, La. High School, he attended Louisiana State University at Baton Rouge, and earned an M. S. degree in Botany in 1951 and a Ph. D. degree in Plant Pathology in 1953. For the next 36 years he was employed at the University of Tennessee where he taught courses in botany, microbiology, and plant pathology. He served as major professor and committee member for many M.S. and Ph. D. candidates. His research activities on the ecology of soil microorganisms and their effects on the severity of plant diseases resulted in more than 70 publications in national and international scientific journals. He was also author of two books on research methods for plant pathologists studying soil-borne plant diseases. One of his books was translated into Chinese. He received the Gamma Sigma Delta Merit Award in 1974. He grew and exhibited prize-winning roses and was active in the Tennessee and American Rose Societies and published several research studies on control and management of rose diseases. Also, for many years he was a reviewer of research grant proposals submitted to the National Science Foundation. He was elected to membership in Sigma Xi Honorary Research Society, Gamma Sigma Delta Honorary Society of Agriculture, and the Honorary Society of Phi Kappa Phi. He was active in the American Phytopathological Society and in the Knoxville Science Forum. His biography is included in “Who’s Who in the South and Southwest” and in “Who’s Who in America”. He retired from U.T. as Professor Emeritus in 1990. As a hobby he played beautiful music on keyboards and home organs and often entertained his friends with mini-concerts. After his retirement he became proficient in and enjoyed playing duplicate bridge. Leander was preceded in death by his parents, Francis Menard and Marguerite Mae Johnson; his son Darryl Johnson; his sister Dorice Burnaman; his brother Elster Verzeyvelt, and step-daughter Kendal Edmonds. He is survived by his wife Jean Cawood Johnson; his son Jim Johnson of Chattanooga; step-son Cary Wolfenbarger and wife Libby; step-son David Perry and wife Debbie; step-son-in-law Andy Edmonds; step-daughter Kristi Wilson and husband Ted; Step-grandchildren Shawn Wolfenbarger and wife Wendy, Mary Hope Naples and husband Ken, Samantha Perry, Michelle Amelse and husband Jon; Travis Wilson and wife Shelia; Amanda Wilson; step-great-grandchildren Avery, Hollie and Sullivan Maples; Charlie Wolfenbarger and Bryson and Garrett Amelse. A Graveside service will be held 3:00 p.m., Thursday, December 17, 2020, Highland Memorial Cemetery. Family and Invited Guests will meet at Rose Mortuary Mann Heritage Chapel at 2:30 p.m., and travel together in procession to the Cemetery. All Social Distancing procedures will be observed and Facial Coverings are required. On-line condolences may be extended at www.rosemortuary.com

The family of Leander Floyd Johnson created this Life Tributes page to make it easy to share your memories.