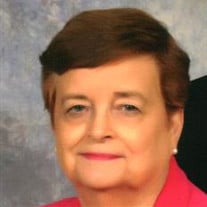 Lou McNutt, age 82, passed away on Wednesday, December 22, 2021. She was born December 29, 1938, in Oxnard, California. She graduated from Carter High School in 1956 and received her X-Ray Technician certification in 1958. She worked as an X-Ray Technician at Baptist Hospital in Knoxville, TN and retired from the University of Tennessee where she worked as an X-Ray Technician at the Student Health Clinic. She was a long-time member of Church Street United Methodist Church where she served as a lay leader and Christian educator at the local, district, and conference levels. She was especially proud of the work she did with United Methodist Women, including being president. She supported Wesley House and served on its board. Many charitable organizations were close to her heart, including those that benefitted animals and those in need. Her desire to always expand her knowledge led her to become an active traveler and student of history, culture, and religion. She was an accomplished seamstress and enjoyed making dresses for her granddaughters and the children at Wesley House. She was a member of the Embroiderers Guild and Ossoli Circle. She was preceded in death by her parents Sam and Drinnen Kinser She is survived by her high school sweetheart and loving husband of 64 years, George McNutt, Jr; daughter Dinah McNutt; daughter Lisa (Pete) Bukeavich; Son Russell (Melanie) McNutt; Grandchildren Allison Bukeavich, Elizabeth Bukeavich, Kara McNutt, and Jackson McNutt; Sister Joan Bull; Several nieces and nephews, extended family members, and friends The family and friends will gather at Church Street United Methodist Church on Tuesday, January 4 at 1:00 for a memorial service with receiving of friends to follow. The family will gather at Henry’s Crossroads Cemetery for inurnment on Wednesday, January 5 at 10:30. In lieu of flowers, please send memorials to: Church Street UMC Music Department, Wesley House Community Center, or Young-Williams Animal Center Arrangements by Rose Funeral and Cremation – Mann. Online condolences may be made at rosefuneraltn.com.

Lou McNutt, age 82, passed away on Wednesday, December 22, 2021. She was born December 29, 1938, in Oxnard, California. She graduated from Carter High School in 1956 and received her X-Ray Technician certification in 1958. She worked as an... View Obituary & Service Information

Send flowers to the McNutt family.