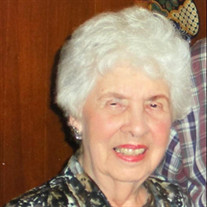 Marjorie Jo Yeomans passed away peacefully at the age of 100 on January 11, 2021, at Northshore Heights of Knoxville, TN, where she had lived for the past year. She was born July 26, 1920, to Leslie Russell Roberts and Marjorie Jo (Lewis) Roberts of Crowley, LA. Jo was preceded in death by her husband of 61 years, Gordon Allan Yeomans, Ph.D., professor emeritus of the University of Tennessee; their daughter, Lynn Yeomans Craver; her parents; and two sisters, Lucille Roberts Mathis and Leslie Ann Roberts Miller. She is survived by her son-in-law, Joseph Lindsey Craver, M.D., of Johnson City, TN; two grandchildren, Joseph Allan Craver of Longmont, CO, and Jessica Elizabeth Craver of Seattle, WA; a nephew, Brian Douglas Miller, and his partner, Cindy Tanner, of Philadelphia, TN; and several nieces and nephews in Louisiana and Texas. Jo was kind, gracious, and giving. She had an amazing memory for detail. She was very proud of her family and Louisiana heritage, and was a voracious reader and student of American history. She was a member of First Methodist Church of Knoxville. She had served her church as president of United Methodist Women and, with her husband, as a lay delegate to the Holston Annual Conference of the Methodist Church. She earned a B.A. degree from Louisiana Polytechnic Institute (Louisiana Tech University) and an M.A. from UT; both degrees were in history. She taught history in the UT Evening School for a time and worked on the editorial staff of The Papers of Andrew Johnson for a number of years. Jo was a member of the Daughters of the American Revolution and the United Daughters of the Confederacy. She had served as a vice regent of the Bonny Kate Chapter, DAR, and as president of Chapter 89, UDC. Jo was on the Executive Board of the UT Women’s Club, serving as president in 1986-87. A private family service will be held at a later date. Arrangements made by Rose Mortuary Mann Heritage Chapel.

Marjorie Jo Yeomans passed away peacefully at the age of 100 on January 11, 2021, at Northshore Heights of Knoxville, TN, where she had lived for the past year. She was born July 26, 1920, to Leslie Russell Roberts and Marjorie Jo (Lewis) Roberts... View Obituary & Service Information

The family of Marjorie Jo Yeomans created this Life Tributes page to make it easy to share your memories.

Marjorie Jo Yeomans passed away peacefully at the age of 100...

Send flowers to the Yeomans family.