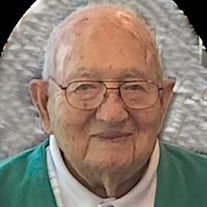 Marshall Gaines “M.G.” Duncan, age 95, died on Monday, December 21st in Knoxville, Tennessee. Born in Powell, Tennessee, Marshall grew up in Andersonville and served in the Navy during World War II. Marshall is a graduate of Carson Newman College in Jefferson City, Tennessee and in 1955 received a Master of Theology from Southwestern Baptist Theological Seminary in Fort Worth, Texas. After pastoring churches in both Texas and Tennessee from 1950-1965, Marshall served as a missionary in Kenya, East Africa from 1965-1990. After retiring from the Foreign Mission Board of the Southern Baptist Convention, Marshall served as an Interim Pastor for churches in Alaska and Hawaii. Marshall is preceded in death by his first wife, Margie Rains Duncan, who died in 1983 (m. 1950), and his parents, Hugh and Eulelia Duncan. He is also preceded in death by five brothers, Hugh Duncan, Jr., George Duncan, Bill Duncan, Jimmy Duncan and John Duncan, and two sisters, Annetta Gilbert and Myrtle Brookshire. Marshall is survived by his wife, Julia Cruze Duncan (m. 1983) and his two sons, M. Alan and Andrea Duncan and Ken and Cindy Duncan. He is also survived by his three granddaughters, one grandson and nine great-grandchildren: Betsy and Philip Barr (Nathaniel and John-Alan), Beth-Ann and Jared McDonald (Callie, Scott and Deacon), Chrissy and Dave Williams (Carter and Duncan) and Curt and Caroline Duncan (Arden and Hollis). Marshall is also survived by two sisters, Sue and Jay Craft and Sarah Duncan,as well as numerous cousins, nieces, nephews and in-laws. Marshall had many international friends, missionary colleagues, and ministry partners whom he dearly loved. Due to current COVID conditions, there will be a private family graveside service at Black Oak Baptist Church Cemetery in Clinton, Tennessee. In lieu of flowers, Julia requests donations be made in honor of Marshall Duncan to the International Mission Board of the Southern Baptist Convention.

The family of Marshall Gaines "M.G." Duncan created this Life Tributes page to make it easy to share your memories.

Send flowers to the Duncan family.