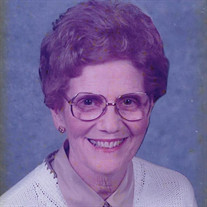 Mary Katherine McClure Hoskins passed away at home on January 16, 2022, at age 93. She was born on October 26, 1928, in Etowah, Tennessee to Marshall R. McClure and Johnnye Steed McClure. She was preceded in death by her parents, and brother Marshall R. McClure, Jr. During the depression, she moved with her family to Canton, Georgia, her father’s hometown. In 1942, she moved with her family to Knoxville, Tennessee, where she graduated from Knoxville High School. She graduated from the University of Tennessee in 1949 at the age of 20. Upon graduation, she worked at the University of Tennessee Treasurer’s office for several years. In 1951, Katherine married Edwin Hoskins, her husband for over 70 years. They lived in El Paso Texas while he was serving in the United States Army. She returned to Knoxville when Edwin was stationed in Germany, where she continued her work at the University of Tennessee until her children were born. She is survived by her husband, Edwin C. Hoskins; children, John M. Hoskins (Karen), David T. Hoskins, Laura Hoskins Walker (Mark); grandchildren, Justin Hoskins (Ashley), Aaron Hoskins (Susanna), Chris Walker, Amy Walker, Holly Walker; and great grandchildren, Jackson Hoskins, Katherine “Kate” Hoskins, and a baby girl due in the summer. Katherine devoted her life to her family, her Church, her friends, and her community. She was a member of Central United Methodist Church for 80 years, where she served in many different roles. She was active in the United Methodist Women, where she served as local President and Chair of her women’s circle organization for 40 years. She was also active in the Children’s department for many years. There will be a private Graveside Service for the family at Highland Memorial Cemetery to be followed by a memorial service at a later date. The family requests that memorials be made to Central United Methodist Church, 201 E. Third Avenue, Knoxville, Tennessee 37917. To know Katherine was to love her. She lived a full and fulfilling life. Arrangements by Rose Funeral and Cremation – Mann. Online condolences may be made at rosefuneraltn.com.

Mary Katherine McClure Hoskins passed away at home on January 16, 2022, at age 93. She was born on October 26, 1928, in Etowah, Tennessee to Marshall R. McClure and Johnnye Steed McClure. She was preceded in death by her parents, and brother... View Obituary & Service Information

Mary Katherine McClure Hoskins passed away at home on January...

Send flowers to the Hoskins family.