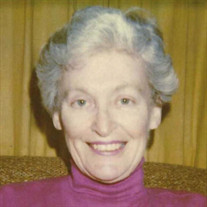 Mary Shirley Johnson Nicholson died at Shannondale Health Care Center on November 28, 2021. Shirley, as she was commonly known, was born July 31, 1921 in Chicago, Illinois to Floyd and Ida Johnson. During her childhood, she lived in Chicago, Elgin, and St. Charles, Illinois, and Frankfurt, Indiana. After starting at the West Side Elementary School in St. Charles, Shirley transferred to the newly completed George Rempe Memorial School, better known as St. Patrick’s. After completing elementary school and moving to Frankfurt, she started at Frankfurt High School. With a growing interest and talent in playing the piano, she transferred to St. Francis High School in Lafayette, Indiana to take advantage of its excellent music program. She was one of a handful of residential students there and did janitorial work to help pay for her tuition and board. Following graduation as valedictorian in 1939, she enrolled at Purdue University, aided by academic scholarships. She graduated at the top of her class with a B.S. in December of 1942. Although she had considered teaching, she was recruited as a Curtiss Wright Cadette, part of the WWII effort. Early the next year, she started an intensive 10-month aeronautical engineering training program at Penn State University. She then worked for Curtiss-Wright for the next four years, first in Buffalo, NY and then in Columbus Ohio, on drawings, reviewing calculations, and other tasks. Following a short stint with Freyn Engineering in Chicago, she moved to Oak Ridge in June of 1948 to work for Fairchild Aircraft, primarily on the Nuclear Energy for Propulsion of Aircraft project. Shirley met Edward (Nick) Lee Nicholson, Jr. at a New Year’s Eve party in 1949 and they married in February 1951 in Oak Ridge. Nick was a chemical engineer who came to Oak Ridge as part of the Manhattan project and years later retired from Oak Ridge National Laboratory where he worked on atomic energy projects. Shirley left her position at Fairchild a few months after getting married when she and Nick moved to New York City for a brief work assignment of Nick’s. Shortly after their return to Oak Ridge, they moved to Idaho Falls, Idaho, where Nick had another work assignment. In the summer of 1953 they returned to Oak Ridge with their first son Paul. A few years later they built a house in west Knoxville to accommodate their growing family. Except for a two-year stint in Mol, Belgium in 1959—1961, where Nick had another work assignment, Shirley lived in the west Knoxville house until she moved to Shannondale Retirement Center in 2017. While living in Belgium, the family, which then included three sons, traveled widely in a VW bug and visited 10 other European countries. After returning to Knoxville in the summer of 1960, Shirley focused on raising her sons (a fourth was born in late 1961) and various volunteer activities, including the local chapter of the American Association of University Women and leadership roles in the West Hills Evening Garden Club and West Hills Council of Garden Clubs. In 1970 she began working as a volunteer at the Sacred Heart Elementary School library. Two years later she enrolled in a course in children’s literature in the University of Tennessee School of Library Science and was encouraged by the department head to pursue an MS degree in library science, which she attained in 1977. Shortly after that she began getting paid for her Sacred Heart library work and worked as the Head Librarian until her retirement in 1986. Two years later, she began working as a volunteer at the Lakeshore Mental Health Institute and continued there until Lakeshore closed in 2012. She was named the 1994 Tennessee Mental Health Volunteer of the Year for her work at Lakeshore. During this period she and Nick were active in the Tennessee Native Plant Society, where Shirley served as Treasurer and a Board member. Shirley was also active in the Ladies of Charity of Knoxville. During her time as a librarian, Shirley became interested in storytelling and developed this interest by joining the Smoky Mountains Storytelling Association, taking courses at East Tennessee State University and in Jonesborough, TN, and working with the Knoxville Writers Guild. For several years she told stories at schools, hospitals, Elderhostel programs, and other venues. Shirley is preceded in death by her husband of 61 years, Nick, her son Edward Lee Nicholson III, her sister Lorraine, and brothers Jim and Pat. She is survived by her sister Fran Johnston and by three sons and two daughters-in-law: Paul Edward Nicholson and wife, Faye Chang of Thousand Oaks, CA, Dr. Charles Patrick Nicholson and wife Dr. Niki Stephanie Nicholas of Norris and Oneida, TN, and Gerard Lee Nicholson of Guyton, GA. There are three grandchildren: Ian Nicholson of Oxnard, CA, Elle Nicholson of Alexandria, VA and Eric Nicholson of San Diego and one great grandchild, Dylan Nicholson. She also leaves a foster son, Nguyen Nho Phong of New Market, VA. The family will receive friends at Rose Mortuary-Mann Heritage Chapel, 6200 Kingston Pike, Knoxville on Friday, December 10, from 5:00 to 7:00 p.m. The funeral mass will be at Sacred Heart Cathedral, 711 S. Northshore Drive, Knoxville on Saturday, December 11, at 1:30 p.m. with Father David Boettner officiating. The family requests that attendees wear masks. Memorials may be made in Shirley’s name to the American Chestnut Foundation, www.acf.org, or the Sacred Heart Cathedral building fund, www.shcathedral.org. Arrangements by Rose Funeral and Cremation - Mann. Online condolences may be made at rosefuneraltn.com.

Mary Shirley Johnson Nicholson died at Shannondale Health Care Center on November 28, 2021. Shirley, as she was commonly known, was born July 31, 1921 in Chicago, Illinois to Floyd and Ida Johnson. During her childhood, she lived in Chicago,... View Obituary & Service Information

Send flowers to the Nicholson family.