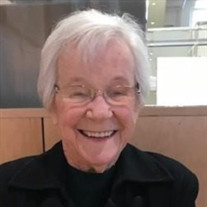 Sweet, gentle Mary Van Beke passed on December 28, just a few days shy of her 105th birthday. Kindness and generosity of spirit marked every aspect of her entire life and led to a lifetime of friendships. Born into a poor immigrant family in Newark, NJ on January 4, 1917, her father died in an industrial accident when she was only about five years old, leaving a non-English speaking widow with three young daughters. Being the oldest, Mary learned hard work, responsibility and the importance of family at a very early age, traits that she carried throughout her life. At some point her beloved violin had to be sold and, upon graduation from eighth grade, she went to work as a live-in housekeeper and cook for a well-to-do family where she learned the art of entertaining properly and, to her lifelong dislike, polishing silver. Always an excellent cook and baker, there was always tin of freshly baked cookies, shortbread, or rugelach for her many visitors. Idleness did not suit her. From her early age she and her mother did anything to earn a bit of money. They tended plots in the local Jewish cemetery, picked fruit and vegetables during season, remember, New Jersey was clearly The Garden State back then, took in washing and ironing. Anything to support the young family. At the end of the day she went to the local green grocer to collect the remains of the day, and to the butcher for soup bones. She spoke of having lived off cabbage soup for much of her childhood. Later in life she earned her GED and moved from the assembly line to the office after she graduated secretarial school. Always the go-to worker, she earned many awards from her employers. From an early age she read the daily newspaper from cover to cover because she sat with her mother every day and read it to her. To the very end she did not watch daytime TV, preferring to read, knit, and visit with friends. But, in the evening she put on the news shows and kept abreast of world and US domestic events. She was a lifelong Democrat and remembered listening to FDR’s fireside chats during the Great Depression. In 1936 she married Charles Van Beke who came from a similarly impoverished childhood. They had $5.00 between them. With hard work and frugality they achieved the American Dream even having a beach house in Manasquan, NJ, the site of many fun filled vacations for their family. They were a truly loving couple until Charlie’s death in 1979. Thereafter, the attractive and vivacious Mary had no lack of suitors but none like her Charlie and she chose to remain a widow for her remaining 40 plus years, devoting herself to her family, community, and the many friends she made through her love of the needle arts in which she excelled. Thank you to all of the knitting friends and neighbors she made after moving to Knoxville 20 years ago to be with her only child Charles and his family. And, not to be remiss, she loved the Lady Vols and Pat Summitt, even being featured on the Jumbotron while she attended a game on her 100th birthday. Into her 105th year she lived independently in her own home until a disastrous fall changed her life so dramatically. She spent her last few months at Arbor Terrace. Her family is grateful for the caring folks at that assisted living facility and the good hospice folks. A memorial service will be held at Westminster Presbyterian Church, 6500 S. Northshore Dr., at 6 pm on January 4, a welcoming and inclusive church home to all God’s children, a church community that fit her personality perfectly. While Mary would have loved to entertain attendees with a festive dinner and music from the 1940’s Big Band era, Covid prevents such a post memorial gathering. In lieu of flowers, Mary would have been honored for you to donate to organizations benefiting the health and development of children. She was a supporter of St Jude Children’s Hospital. Mary’s loving family included son Charles (Sherry), grandchildren Christopher (Jill), Timothy, and Jamie Williams (Trey), and great grandchildren Caroline, Katherine, and Andrew Williams, and Anna and Charlotte Van Beke, and dearest of friends Linda Van Beke. Online condolences may be made at rosefuneraltn.com.

Sweet, gentle Mary Van Beke passed on December 28, just a few days shy of her 105th birthday. Kindness and generosity of spirit marked every aspect of her entire life and led to a lifetime of friendships. Born into a poor immigrant family in... View Obituary & Service Information