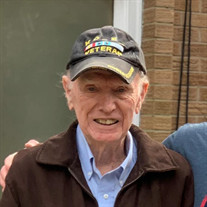 Matthew Francis Callahan passed away on September 7, 2021 with his beloved family at his side. He was born in Manhattan, New York on July 6, 1929 to Irish American parents, Patrick Joseph and Mary Kiernan Callahan. He was preceded in death by his wife Shirley Faith Callahan, sisters Patricia Callahan and Catherine Kennedy and granddaughter Mary Farris Callahan. He grew up in NYC, NY in an Irish neighborhood on 94th St. He attended the University of Iowa where he received his chemical engineering degree. He had a storied career innovating and inventing new materials in the plastics industry with US Rubber, Allied Chemical, Olin, and Uniroyal. In 1973, he moved to Knoxville, TN with his purchase of Patent Plastics in the old Vestal area of South Knoxville. He went on to create a spin-off, MPC industries, which became a leading innovator in the military and commercial surface preparation industry. He was an avid golfer and loved football, basketball and baseball. He enjoyed coaching and watching all sports. He was best known for his love of the ponies and his enthusiasm for the horse racing industry. He was a proud veteran of the Korean War during his service with the United State Army-Corps of Engineers. He proudly cherished his family, children, grandchildren and friends. He was always there with a handshake, smile, supporting arm or listening ear. He never missed an opportunity to connect when he met someone and he never knew a stranger. He will be missed by all who knew him. Matthew was survived by his wife Shu Fen Callahan and their two children daughter Cici and son Patrick, sister Margaret Callahan, daughters Theresa Hash(Jimbo), Cathy Rohde(Mike), sons Matthew(Whitney), Michael(Debbie), grandchildren Thomas Hash, Allison Summers, Christopher Grande(Kelly), Catherine Callahan, Patterson Callahan, Deming Wehby(Sam), Kiernan Callahan, Anna Grace Callahan, Ayers Callahan, Landon Callahan and Miller Callahan, great grandchildren Marley, Merritt, and Quinn, and his nieces and nephews of the Kennedy and Grenier families. Services will be held on Tuesday, September 14, 2021 at Sacred Heart Cathedral, 711 S. Northshore Drive, Knoxville, TN 37919. Receiving of friends at 9 AM, funeral mass at 10 AM. Burial will be at the East Tennessee State Veterans Cemetery, 5901 Lyons View Pike, Knoxville, TN 37919 at 1 PM. In lieu of flowers, the family requests that memorials be made in Matthew’s name to the University of Iowa-Stead Family Children’s Hospital, www.uichildrens.org. Online condolences can be made at www.rosefuneraltn.com.

Matthew Francis Callahan passed away on September 7, 2021 with his beloved family at his side. He was born in Manhattan, New York on July 6, 1929 to Irish American parents, Patrick Joseph and Mary Kiernan Callahan. He was preceded in death by... View Obituary & Service Information

Matthew Francis Callahan passed away on September 7, 2021 with...

Send flowers to the Callahan family.