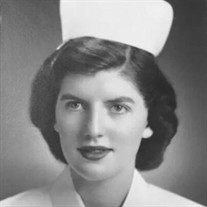 Maureen Frances "Monie" Moore (January 21, 1930-Feb 6, 2022) died peacefully at her home in Knoxville, TN at the age of 92. Born in Port au Port, Newfoundland, she was the 8th of 9 children. The daughter of a successful mercantile owner William H. Abbott and Mary Margarita (Rita) Abbott, she had an idyllic childhood and could often be found fishing in the brook with a bent pin or playing baseball with the local boys. After graduating from high school at age 16 she attended St. Francis of Xavier University in Antigonish, Nova Scotia until she was old enough to attend nursing school at St. Mary's University in Montreal, Quebec. She obtained her RN and returned to her Newfoundland home where she initially worked in Corner Brook as a nurse and she would take 2 hour snowmobile rides home to visit her parents. When Harmon Air Force Base opened in Stephenville Newfoundland she met an US Air Force physician, Dr. John David Moore Jr, fell in love, and married and eventually moved to Knoxville, Tennessee, after five years in St Louis where David completed his Ob/Gyn residency. She had four children: John William Moore of Knoxville; Dr. David Patrick Moore (Gina) of Snowmass, Colorado; Dr. Mary Patricia Moore (Robert Gabb) of Rural Hall, North Carolina and Susan Maureen Lindsey (John) of Tenino, Washington. She lived a life of quiet, faithful Catholicism and most mornings could be found in her favorite pew at Sacred Heart Cathedral for mass. She was active in her guild of the Ladies of Charity and her needlework still hangs in the church. Even as her mobility became more of a challenge, she returned annually to her family home in Newfoundland and was able to visit her dear friends and family as recently as this past summer. She was preceded in death by her loving husband, parents and siblings. She will leave a lasting legacy with her children, sister in law Sandra Abbott, sister in laws Doris Jean Moore and Dorothy Hyder as well as numerous nieces, nephews and cousins. Special thanks to caregivers Diane, Holly, Macy, Mindy, Brenda and Dana who treated her as their own family. Visitation will be held at Rose Mann Funeral Home on February 10 from 5pm to 7 pm with rosary to follow. Funeral Mass will be held at Sacred Heart Cathedral on February 11 at 1:30 pm with graveyard service to follow. In lieu of flowers, donations may be made to the Sacred Heart Cathedral. www.shcathedral.org

Maureen Frances "Monie" Moore (January 21, 1930-Feb 6, 2022) died peacefully at her home in Knoxville, TN at the age of 92. Born in Port au Port, Newfoundland, she was the 8th of 9 children. The daughter of a successful mercantile owner William... View Obituary & Service Information

Send flowers to the Moore family.