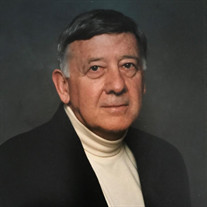 McDowell “Mack” Fair Bingham departed this world for his eternal home in Heaven on March 22, 2022, at the age of 90. Mack leaves behind two daughters, Cecilia “Cele” Marie Bingham of Knoxville, TN and Susan Bingham Letterman of San Diego, CA and his younger brother Samuel Montgomery Bingham DDS of Chattanooga, TN along with a wealth of friends he considered family. He was proceeded in death by his son, Barton Kendal Bingham in 1979 at the age of 20, his wife Marie Draper Bingham in January 2021 and his twin brother William Cecil Bingham Jr. in January of this year. Mack was born March 6, 1932, in Chattanooga Tennessee to William Cecil Bingham Sr. and Willye Montgomery Fair Bingham just 8 minutes behind his twin brother Bill. The twins were well known for being fun loving and pulling pranks on everyone growing up. They loved their “House on the Hill” and could often be seen riding their horses on Moccasin Bend. Mack was an excellent student and athlete who excelled at all sports. While in high school, he was a Golden Gloves Boxing Champion, avid weightlifter and played multiple sports. The twins graduated from Red Bank High School in 1950. Mack went on to Georgia Tech University to study Engineering. While at Georgia Tech he attended a Billy Graham Crusade and answered the call to ministry. Shortly after he transferred to Carson Newman College on a Football Scholarship. Mack graduated from Carson Newman College in May 1955 with a BS with a major in history and a minor in physical education. At Carson Newman, he was an honor roll student and lettered in football, basketball, and tennis. While attending Carson Newman Mack met his future wife Marie at the daily mandatory Chapel service. Both straight A students, the star athlete and beauty queen married in July of 1955 and set out to start their life together in Louisville, KY where Mack earned his Master of Religious Education degree from the Southern Baptist Theological Seminary in Louisville, KY and Marie taught public school. After seminary Mack served at several churches throughout the years as a Minister of Education and Administration. He began his career in the ministry at Robertsville Baptist in Oakridge TN, followed by Prescott Memorial and Graceland Baptist in Memphis, TN. One of his fondest memories of Memphis was getting to know Elvis Presley, visiting and ministering to Elvis in his Graceland home. In 1971 Mack accepted a call to Central Baptist Church Bearden in Knoxville where he served until retiring in March 1997. His recruiting abilities, tireless work ethic, leadership and dedication were instrumental in molding Central Baptist Bearden into the ministering body it is today. During his career Mack served on the Executive Board of the Tennessee Baptist Convention, the State Missions Committee, and as President of the Church Training Convention as well as active in Sunday School work through the Knox County Baptist Association for which he also served as a moderator. He was a contributing writer for The Church Administration Magazine and other many other publications. On April 6, 1997, the Mayor of Knoxville, Victor Ashe declared Mack Bingham Day in the city and in his speech urged all citizens to join the observance to honor one of God’s most faithful servants. Mack was honored as the Carson Newman College Distinguished Alumni 2001-2002 and served on the Board of Directors from 2008 - 2011. As a huge proponent of missions, he organized many mission trips to South Dakota and Montana Indian Reservations building schools and churches and international medical missions to Venezuela. Perhaps his greatest influence and service in ministry to his fellowman were in two organizations that are still today providing care and support for the larger community. Mack courageously launched the Samaritan Ministry in 1996 to engage Christians in the fight against HIV and AIDS. The ministry has grown over the years now serving as a beacon of light to challenge the negative and judgmental attitudes that exist toward people with HIV and AIDS. The second was Mission of Hope launched in 1996 to provide relief from poverty for much of rural Appalachia. Mack was instrumental in educating churches on the dire living conditions of families in that area and played a critical role in providing compassionate support and resources to those in need. His influence and service can still be felt throughout Baptist ministries at local, state, national and international organizations. Mack loved people and loved life. If it was something he enjoyed, he was all in. When not working and ministering to others, he could be found playing tennis, golf, hunting and birddog training. He insisted on rising at 6:00am and going to the gym to work out with weights well into his 80s. An avid Vol fan, he loved attending football and basketball games and was known for walking in with his brown bag of peanuts he had roasted at home. Perhaps what he was most proud of were his two daughters, “The Girls” as he called them and was fortunate enough to visit them in both Hawaii and Japan. A Celebration of Life will be held at Central Baptist Church Bearden, Wednesday, April 27th at 5:00pm. Further details available at www.centralbearden.org. Online tributes, memories and condolences may be left for the family at www.rosefuneraltn.com. In lieu of flowers, the family request that memorial donations be made to Central Baptist Church Bearden, Mack Bingham Memorial. POC Gary Schmieder, 6300 Deane Hill Drive, Knoxville, TN 37919.

McDowell “Mack” Fair Bingham departed this world for his eternal...

Send flowers to the Bingham family.