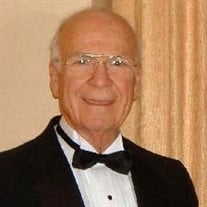 Mel Sturm, age 97, passed away at his home in Knoxville, surrounded by family, on Monday, March 1, 2021. He bravely fought a two-year battle with neural sheath sarcoma. Mel was committed to family, community and giving back. He and his beloved wife, Frances, of almost fifty years, treasured their relationships with family and friends, and their life as part of the Oak Ridge community. They enjoyed tennis mixed doubles; international travel; entertaining in their home; attending the symphony, theater, University of Tennessee football and basketball games, and were early and loyal fans of the Lady Vols. Mel was born in Appalachia, Virginia in 1923, second son of four. The family lived in Appalachia, Virginia; Corbin, Barbourville, Pineville, and Middlesboro, Kentucky; and LaFollette and Jellico, Tennessee. One of his most talked about accomplishments was swimming a mile across the Ohio River at age nine. After earning an engineering degree from the University of Tennessee, he enlisted in the Navy in 1944. He was a member of Admiral Halsey’s staff in World War II, in command of air plot control for the Third Fleet. He was present for the Japanese surrender ceremony aboard the battleship U.S.S. Missouri. Following the war, he took an engineering job in Chicago and then moved to Jellico, due to his father’s untimely death in an automobile accident. He took a leave to help wrap up his father’s business, which led to his decision to stay in Jellico, where he ended up becoming mayor at age 29. He lived the rest of his life in East Tennessee, moving to Oak Ridge in 1955 as a newlywed. He was one of the founding merchants at the groundbreaking for the original downtown shopping center in Oak Ridge. He owned and operated Sturm’s Youth World and Backstage until 1979. He was a well-respected businessman and many people sought him out for advice as they were contemplating business or personal decisions. He and wife, Fran, moved to west Knoxville in 1996. He was a member of the Jewish Congregation of Oak Ridge, Heska Amuna Synagogue and Temple Beth El of Knoxville. Throughout his life he was active in the community serving on numerous boards and committees, including Oak Ridge Gas Utility Board, Oak Ridge Methodist Medical Center, SunTrust Regional Bank, Oak Ridge High School Scholarship Committee, Rotary Club of Oak Ridge, Knoxville Jewish Alliance Archives Committee, Knoxville Jewish Day School Scholarship Committee, and was one of three founding members of the Oak Ridge Arts Council. Mel was preceded in death by his wife, Frances Alper Sturm, his son Bradley Louis Sturm, and his parents Louis Henry and Beatrice Cawn Sturm. He is survived by daughters Diane Glass and Michelle Sturm, both of Colorado and daughter-in-law Melissa Hasden Sturm of Knoxville. Grandchildren include Leah (David) Denzel of Lakewood, Colorado; Derek Glass of Boulder, Colorado; Britt (Elyssa) Sturm of Knoxville; and Eleanor Sturm of Townsend. Brothers Howard Sturm of Los Angeles, Hiram Sturm of Atlanta, and Evan Sturm of Knoxville and many beloved cousins, including Sam Balloff and Mary Ann Merrill, both of Knoxville, and beloved nieces, nephews, grand nieces and nephews, and friends, including Louise Spector of Chattanooga, Tennessee. In lieu of flowers, memorial contributions may be made to the Stanford Eisenberg Knoxville Jewish Day School (PO Box 10105 Knoxville, TN 37939 www.kids.org/donate) or the Bradley Louis Sturm Memorial Scholarship, ℅ Pellissippi State Foundation at 10915 Hardin Valley Road, Knoxville, TN 37932 or online at giving.pstcc.edu. Arrangements by Rose Funeral and Cremation-Mann. Online condolences may be made at www.rosemortuary.com.

Mel Sturm, age 97, passed away at his home in Knoxville, surrounded by family, on Monday, March 1, 2021. He bravely fought a two-year battle with neural sheath sarcoma. Mel was committed to family, community and giving back. He and his beloved... View Obituary & Service Information

Mel Sturm, age 97, passed away at his home in Knoxville, surrounded...

Send flowers to the Sturm family.