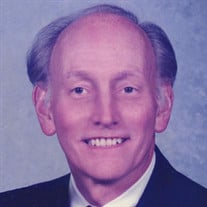 Myron C. Ely, age 81 and a lifetime resident of Knoxville, passed away peacefully at home on January 3, 2022. Myron was a man of integrity and faith who loved his family and served his community well. A graduate of West High School and University of Tennessee, he worked tirelessly to obtain his Juris Doctorate in 1966. He was a veteran of the US Air Force, and member of the Air National Guard at McGhee Tyson. Myron was an active member of Sequoyah Hills Presbyterian Church, where he served in many capacities, including as a deacon, elder, and Stephen Minister for over 20 years. He was also a member of Knoxville Museum of Art, West Knoxville Sertoma Club, both the Farragut and Downtown Rotary Club, and the SAE Frat at UT. Myron didn’t let any opportunity to learn, grow or serve pass him by. This was in addition to serving as the President of East Tennessee Title (the oldest title company in the area: 1941-2018) for many years. He was a two-time President of Tennessee Land Title Association and on the Education Committee with them as well. He cultivated friendships and partnerships that lasted a lifetime, and a legacy that will endure. He also enjoyed traveling, dancing and laughing with his family and friends, and will be remembered with respect and a smile. Myron was preceded in death by his parents, Myron Ray and Mollie Farmer Ely and sister, Mollie Ely Graves Vester. He is survived and will be deeply missed by his best friend and beloved wife of over 35 years, Jayne Linton Ely; children, Travis Hunter Kelton and fiancée Holly Mosley, J. Lynn Kelton Farrer and husband Jeffrey; grandchildren, Samuel Hunter Tabiendo and Dylan Scott Farrer; sister, Carole Ely Fields; many nieces and nephews; and other extended family and friends. A Private Family Interment will be held on Monday, with Rev. Mark Lampley officiating. The Celebration of Life will be held at a later date and will be announced. In lieu of flowers, please consider a donation to the KMA at knoxart.org or Sequoyah Hills Presbyterian Church at sequoyahchurch.org in Myron’s memory. Rose Funeral and Cremation – Mann is honored to serve the Ely family and invites you to view and sign their online guestbook at rosefuneraltn.com.

Myron C. Ely, age 81 and a lifetime resident of Knoxville, passed away peacefully at home on January 3, 2022. Myron was a man of integrity and faith who loved his family and served his community well. A graduate of West High School and University... View Obituary & Service Information

Send flowers to the Ely family.