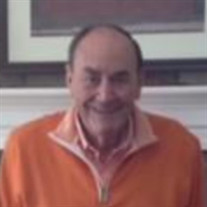 Norman Wade Compton, 83, passed away on May 7th, 2022. Norman was born December 25th, 1938 in Kingsport, TN. He graduated from Dobyns-Bennett High School and later attended the University of Tennessee. He met his wife, Martha Stiles Compton, during his Junior year of high school. They were married on July 13th, 1957. They were blessed with three children in their first three years of marriage. Norman began his career in Kingsport, TN working in the family cement and block business. He and Martha moved to Morristown, TN where he continued in the family business while beginning to venture into a career of home building. They later moved to Greeneville, TN where Martha became a realtor. For 30 years Norman built homes and Martha sold them. In 1999 they moved to Dallas, TX to be closer to their son and his family. They continued their real estate career working for Ebby Holliday Realtors. Upon retirement, they elected to move back to Tennessee. Their marriage was a sixty-four year partnership grounded in faith, family and friends. Norman was preceded in death by his parents, Charles Irish Compton and Myrtle Franklin Compton, sister Louise Compton and daughters, Dr. Teresa Compton and Marcia Swallows. He is survived by his wife Martha Compton; son John Compton, daughter-in-law Cindy Compton; grandchildren Emily Jones, Wes Swallows, Derek Day, Kendall Compton Gray (husband Dee), Caroline Compton and Jack Compton; sisters Sharon Compton, Carolyn McConnel and her husband William. In addition Norman was blessed with three great-grandchildren. A Celebration of Life will be held at 2:00pm Wednesday, May 11th at Rose Mann Chapel, 6200 Kingston Pike Knoxville, TN. A family Graveside Service will be held at 3:00pm at Berry Highland Memorial. A Reception will follow at Cherokee Country Club. In lieu of flowers, the family requests that donations be made to the Pat Summitt Foundation: Pat Summitt Foundation 520 W. Summit Hill Drive Suite 1101 Knoxville, TN 37902 or www.patsummitt.org/donate. You are also invited to view and sign the online guestbook at rosefuneraltn.com.

Norman Wade Compton, 83, passed away on May 7th, 2022. Norman was born December 25th, 1938 in Kingsport, TN. He graduated from Dobyns-Bennett High School and later attended the University of Tennessee. He met his wife, Martha Stiles Compton,... View Obituary & Service Information

The family of Norman Wade Compton created this Life Tributes page to make it easy to share your memories.

Send flowers to the Compton family.