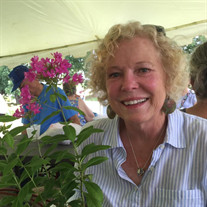 Patricia (Pat) Ann Fowler Watson, 74, passed away on Christmas Day. Always up for a good time, Pat was full of life. She made the best chocolate chip cookies and cornbread, grew the most beautiful flowers, was the Queen of homemade Christmas cards and loved to tell stories about her life. Her favorite was how she met a cute boy at Inskip pool who walked on his hands and stole her heart in the eighth grade. That boy, Robert H. Watson, Jr., became her high school sweetheart and later, her husband. Pat was the eldest daughter of J.W. and Mary Elizabeth Fowler. She and her sister, Pam, grew up in Fountain City. Pat graduated from Central High School in 1964 and, four years later, from the University of Tennessee. She was an elementary school teacher, an avid community volunteer and never met a stranger. She was especially proud of attaining her black belt in Isshinryu Karate and would often do a spontaneous high kick just to prove she “still had it.” An incredible mother, she was, if possible, an even better “Bop” to her seven grandchildren. Pat was predeceased by her husband of 47 years, Robert H. Watson, Jr.; her parents, J.W. and Mary; and her sister, Pam Reedy. She will always be loved and remembered by her children and their families: Beth, Danny, Alex and Lucy Drinnen; Christy, Benj, Ian, Bonnie, Scout and Brennan (Bacon) Lauderback; and Luke, Jackie and Robb Watson; as well as her many, many friends including her cousin Bob (and Barbara) Eldridge. In light of Pat’s wishes, she will be cremated. A celebration of her life may be held at a later date. If you were touched by Pat in some way, we ask that you honor her memory by talking to a stranger, sharing a story about your life, donating to a good cause, tending to your garden or baking some cookies. If you are able, attempt a high kick. Life is short. Make it fun while you can.

Patricia (Pat) Ann Fowler Watson, 74, passed away on Christmas Day. Always up for a good time, Pat was full of life. She made the best chocolate chip cookies and cornbread, grew the most beautiful flowers, was the Queen of homemade Christmas... View Obituary & Service Information

The family of Patricia Ann Watson created this Life Tributes page to make it easy to share your memories.

Send flowers to the Watson family.