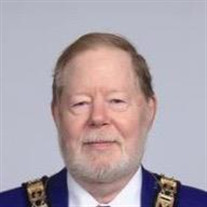 Paul Frederick Richards passed away on April 22, 2021. Paul was born on February 13, 1946 in Winston-Salem, North Carolina. When he was four, the family moved to Knoxville where he continued to reside until his death. Paul attended West High School in Knoxville graduating in 1963. He later attended the University of Tennessee and Knoxville Business College (South College) where he received a degree in accounting. He was employed by the Knox County Clerk’s Office as a deputy clerk retiring after 39 years of service. Paul was preceded in death by his parents Paul D. Richards and Reba Kent Richards. He is survived by his sister Elizabeth Richards Horton (Michael) of Knoxville. He also leaves behind his special friend Carrie Brand. Paul was an active member of Apostles Anglican Church in Knoxville where he served faithfully as an usher. One of Paul’s great passions was travel and he took many wonderful trips over the years, coming back with great photos and generous gifts for family and friends. He devoted many hours to volunteer work through the organizations he belonged to. He was active in the Boy Scouts for years, serving as a scout master. One of his greatest joys was sitting and drinking coffee with friends. Paul is remembered for his kindness, his friendliness, and his smile. He was raised a Master Mason on October 1, 1973. He joined the Scottish Rite and was coronated a 33° degree in 2005. Paul was a member of the York Rite and was awarded the Knight of York Cross of Honor. He was elected Most Illustrious Grand Master, Cryptic Masons of Tennessee on March 20, 2017 and by this was awarded the Knight of York Grand Cross of Honor. Visitation will be Monday, April 26 from 5:00-7:00 pm at Mann Heritage Chapel Bearden. The funeral service will be Tuesday, April 27 at 1:00 pm at Apostles Anglican Church (by invitation only), with burial to follow at Highland Cemetery. In lieu of flowers, donations may be sent to Apostles Anglican Church (1540 Robinson Rd Knoxville TN 37923) or Cryptic Masons Medical Research Foundation (PO Box 210 Brownsburg IN 46112-0210). On-line condolences may be extended at www.rosemortuary.com Arrangements by Rose Mortuary Mann Heritage Chapel.

Paul Frederick Richards passed away on April 22, 2021. Paul was born on February 13, 1946 in Winston-Salem, North Carolina. When he was four, the family moved to Knoxville where he continued to reside until his death. Paul attended West High... View Obituary & Service Information

The family of Paul Frederick Richards created this Life Tributes page to make it easy to share your memories.

Send flowers to the Richards family.