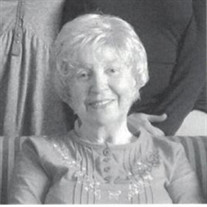 Pauline Patricia Seal passed away peacefully under hospice care at NHC Farragut on January 26, 2021, age 97. Pauline who preferred to be called "Pat" was born in England on Valentine's Day, February 14,1923, to Gordon Merle Wilson (1892-1946) and Dora Kathleen Keer Wilson (1894 - 1972). She had a sister Barbara Yvonne Wilson (1924) and a brother Stanley Gordon Keer Wilson (1928). She met her husband, Major John Strowbridge Howe (1914-1986), who was stationed in London during World War II. They married in England in 1944. Like many of her generation Pat was a "British War Bride" who left her home to make a new life in America. She and John had four children, Robert Anthony Burnett Howe (1945-2014), David Gordon Keer Howe (1947), Lawrence Strowbridge Howe (1951), and Linda Patricia Howe (Allen) (1954). She and John lived in several locations in New England. When her children were grown she enjoyed her career as a secretary for Connecticut General Life Insurance Company. Upon their retirement they moved to Knoxville, Tennessee where they joined Ebenezer Presbyterian Church. Pat liked visiting her English homeland. She would see her brother, go on a coach tour to Ireland or the Lake District and for many years participant in the "St. Aidan's Old Girls Association" where she could visit with some of her old classmates. She enjoyed playing bridge. She joined the "Red Hat Society" and most especially enjoyed participating in community theatre. She was always ready for a nice cup of tea, "A little milk and no sugar, please!" In 1997 she married a widower, Roger Seal. They enjoyed traveling and playing bridge with friends. After Roger's death she moved into to the Echo Ridge independent living. In recent years she has resided in NHC place in Knoxville, Tn. She was preceded in death by her two husbands and her eldest son, Robert. She is survived by her other three children, David, Larry and Linda along with three granddaughters, Elisabeth (Lisa) Irene Howe, Lauren Elizabeth Howe and Reilly Curtis Howe. A private family graveside service will be held. Arrangements have been entrusted to Rose Mortuary Mann Heritage Chapel. Pat enjoyed dogs and cats. In lieu of flowers please donate in her memory to the Humane Society or animal rescue of your choice. Arrangements by Rose Mortuary Mann Heritage Chapel. Online condolences may be made at www.rosemortuary.com

Send flowers to the Seal family.