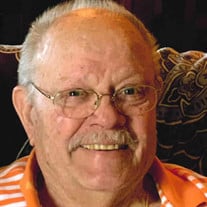 Robert "Bob" Norris went home to be with the Lord on Thursday January 13, 2022 with his loved ones by his side after a brief illness. He was a believer in Christ and knew that he was headed home to be reunited with his family who preceded him to Glory. Bob, also affectionately known as Pop to his family, lived a wonderful life of 87 years in Charlotte, NC and his hometown of Knoxville, TN. While serving in the United States Air Force, he met a beautiful young English woman, Jan, whom he married and raised three children. They were married for 50 years until her passing in 2006. Bob was also preceded in death by Patricia Easterly Norris, his second wife, to whom he was married for 13 years. He worked and retired from the University of Tennessee and Tennessee School for the Deaf. Being a dedicated VOL fan, he would insist on scheduling all gatherings around ballgames. He loved the orange and white passionately. He had many hobbies, but his favorites were fishing and playing golf, which he enjoyed with his children and friends. Bob was a lifetime member of Lincoln Park Baptist Church and grew up in that neighborhood playing football for Fulton High School. The family still has a winning game ball which was given to him. His love for his church was evident and he had dear lifelong friendships with many people there. He served as a deacon, a choir member and on multiple committees. He loved music and always enjoyed singing bass in a quartet. Bob loved his children, grandchildren, and great­ grandchlldren, always bragging about them to everyone. Family vacations were the highlight of summers along with day trips to his favorite place, Cades Cove. He was always quick with a dad joke and loved a good laugh. At family gatherings, Pop would sit and smile as he looked around the room at his family and say, "Look what I started.", while grinning from ear to ear. We were blessed enough to have everyone together this past Christmas unaware that it would be his last one. We are thankful that we were able to spend his last few days together to tell him how much we loved him and that we would see him again in Heaven. He will be missed by his children, Michael (Laura}, Steve (Teresa), and Amanda (Kenny); grandchildren Leigh {James), Jacob, Matt (Haley), Aliana (Hassan}, Shelby, Kelsey (Patrick), Joy, and Ava. Great Grandchildren Emma Kate, Aela, and Marlee. Pat's sons George (Teresa) Lucke (TN}, and Robby {Jackie) Lucke (FL}. The family will receive friends from 3:00 pm until 4:00 pm Sunday January 23, 2022, at ROSE FUNERAL AND CREMATIONS BROADWAY. A funeral service will follow at 4:00 pm with Rev. Trey Black officiating. 1 Peter 5:10 And after you have suffered for a little while, the God of all grace, who called you to His eternal glory in Christ, will Himself perfect, confirm, strengthen and establish you. Isaiah 41:10 Do not fear, for I am with you; do not anxiously look about you, for I am your God. I will strengthen you, surely I will help you, surely I will uphold you with my righteous right hand.

Robert "Bob" Norris went home to be with the Lord on Thursday January 13, 2022 with his loved ones by his side after a brief illness. He was a believer in Christ and knew that he was headed home to be reunited with his family who preceded him... View Obituary & Service Information

The family of Robert "Bob" Norris created this Life Tributes page to make it easy to share your memories.

Robert &quot;Bob&quot; Norris went home to be with the Lord on Thursday...

Send flowers to the Norris family.