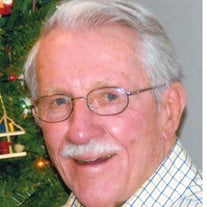 Robert Stuart “Bob” Davis passed away peacefully on Monday, January 18, 2021 at home surrounded by his loving family. He was born on July 28, 1931 in Knoxville, TN and resided there most of his life. Preceded in death by his mother Dorothy Davis Jones and cherished aunt and uncle, Mary Thornton Davis and Hugh Miller Davis. Bob’s love of life and family made him a loved and respected man by so many. He graduated from Knoxville High School in 1949 and The University of Tennessee in 1953 where he was a member of the ROTC and received his commission as Second Lieutenant upon graduation. He was also a member of Kappa Sigma fraternity. Bob proudly served in active duty in the United States Army for five years during the Korean campaign. He was a Rotary Wing Master Aviator serving in the 101st Airborne Division until 1957. He retired as Brigadier General of the 104th Engineer Brigade in 1981 after 35 years of service with the Tennessee National Guard. He was employed by Power Equipment Company and was General Superintendent of East Tennessee Natural Gas from 1961-1992. Bob was a past Chairman of the Dogwood Arts Festival Board, past President of the UT Knoxville Alumni Charter and past Provost of Membership for the Knoxville Rotary Club. He has been an active member of First Baptist Church of Knoxville for many years and particularly enjoyed his Friday afternoon lunches with “Grumpy Old Men” and his Saturday morning Bible Study at Cherokee Country Club. The family will also cherish the many memories of spending time together on Norris Lake and at Pawleys Island, SC. Bob is survived by his high school sweetheart of 68 years, Patricia Harben Davis “Pat” and his adoring daughters Donna Crisp and Jan Broome (Monte). Dearly known by his grandchildren and great-grandchildren as “Gramps”, he leaves grandchildren Jenny Broome Greer (Ryan), Caroline Broome Hamilton (Lucas), John Stuart Broome (Ann Louise) and five great grandchildren, Amelia and Walker Greer, Mary Stewart and Hank Hamilton, and Davis Broome. The family would also like to thank Thomas McLeroy for his loving care and attention over the past 4 years, which enabled Bob to remain at his home. We are forever grateful to him and regard him as family. Friends and family are invited to a military service honoring Bob at 2:00 PM on Monday, February, 1st, 2021 at the Rotunda of The East Tennessee State Veterans Cemetery, 2200 E. Governor John Sevier Highway 37920. Reverend Rachel Hamburger officiating. In lieu of flowers, memorials may be made at his request to Knoxville Area Rescue Ministry or Interfaith Health Clinic. Arrangements by Rose Mortuary, 6200 Kingston Pike (865)588-8578. Online condolences may be made at www.rosemortuary.com.

Robert Stuart &#8220;Bob&#8221; Davis passed away peacefully on Monday, January 18, 2021 at home surrounded by his loving family. He was born on July 28, 1931 in Knoxville, TN and resided there most of his life. Preceded in death by his mother... View Obituary & Service Information

The family of Robert "Bob" Davis created this Life Tributes page to make it easy to share your memories.

Send flowers to the Davis family.