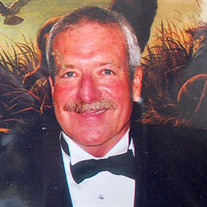 Robert Doyle McClenagan of Maryville, Tennessee went home to his Lord and Savior, Jesus Christ on Saturday, January 22nd. He was surrounded by his family who adored him. Robert was born on July 9th, 1948 in Knoxville, Tennessee. He was the son of Robert Doyle McClenagan and Juanita Draper McClenagan. He grew up and attended Bearden High School where he played football. Known as a fierce competitor, he played both ways, fullback and linebacker. He graduated in 1966 and entered the University of Tennessee where he graduated in 1970 with a BA in Sino-Russian history anticipating going to law school. In 1972 decided to team up with four SAE fraternity brothers to open the first Ruby Tuesdays restaurant on 716 W. 20th Street in Knoxville. Robert joined Sandy Beall, Rick Eldridge, Lee Wallace, Tom Harper and Eric Bettis to launch a casual dining chain that grew to fifteen locations by 1982. Ruby’s was then purchased by Morrison Cafeteria that year and became part of their Casual Dining Group. Robert and his fraternity brothers were brought over to run and expand the Ruby’s concept and the entire team eventually relocated from Knoxville, to Mobile, Alabama. He met the love of his life, Robin Cox in 1981 and they were married in November,1983. Two sons came next and they were his absolute pride and joy. RD arrived 1986 and Ryan in 1988. They resided in Fairhope, Alabama from 1985 to 1998 as Ruby’s expanded rapidly to over two hundred locations. Robert’s leadership skills and overall business acumen led to him becoming the President of Ruby Tuesdays in 1996. Ruby Tuesdays was then spun off from Morrison’s Cafeteria in 1998 as a publicly traded company and moved its corporate headquarters back from Mobile to Maryville, Tennessee. Despite achieving great success after 32 years in the restaurant industry, Robert decided to retire in 2004. His reasons; he simply wanted to fully devote his time and attention to his wife and two boys, his friends and his passion for all things outdoor including motor sports. At his retirement ceremony, he was recognized for many accomplishments but most notably for his great humility. His answer to achieving success, “every day is struggle, work your tail off”. Robert’s spirit of adventure led him to countless hunting trips on 3 continents (USA, South America, Africa) while especially enjoying annual treks to a hunting lodge in Argentina and Patagonia. He especially loved going hunting with his sons and other close friends and family. His last big game hunting trip to Africa in 2021 was an all-time favorite. Robert’s skill with a rifle was legendary and he won an age group national championship in clay shooting and loved teaching others about shooting.. He was an amateur vintage race car driver who competed and won races throughout the United States. He enjoyed an ongoing love affair with an ever-evolving collection of classic race cars. Given his expansive array of hobbies, he built a wide range of friendships. Robert was known for his gentle spirit, teasing nature and unlimited generosity by all who knew him. He was an ardent patriot who loved all things USA. Robert loved to host the entire family in epic fashion for the holidays. He loved good food and to be surrounded by his family. He adored his two sons and his daughter in laws, Emily and Jessica. They weren’t “in laws” to him…they were his “daughters”. His love for being a grandfather to Camille, Maise and Lela Grace knew no boundaries and they loved their “MC” so much. Robert had a deep and abiding faith in Jesus. Robert was tremendously generous and it brought him great joy to serve people through giving to them in so many ways. Over the past 24 years, he was active at First Baptist Maryville and since 2014 he was a member of Fellowship Church in Knoxville, where his son RD is a teaching pastor. We grieve, but with great hope because he is home at last. Robert is survived by his Wife, Robin Cox McClenagan; Sons, Robert Doyle (RD) McClenagan III and his wife Emily, Ryan Mead McClenagan and his wife Jessica; Granddaughters, Camille, Maisie, Lela Grace ;Sister In-Laws, Tracy and her husband David Siddons, Cathy and her husband (Bob) Aulthouse Claudine and her husband Jim Kurp; In-laws, Nancy Smith and her husband Gary, Homer Mead Cox and his wife Janice; Nieces, Brooke Cox, Ava Kurp, Gia Kurp, Leslie and her husband Ryan Long, Betty and her husband David Cronin. Visitation will take place on Thursday, January 27, 2022, from 12:00-2:00 p.m. at Fellowship Church, with a Funeral Service to follow at 2:00 p.m. Interment is private. Arrangements by Rose Funeral and Cremation- Mann. Online condolences may be made at rosefuneraltn.com. In lieu of flowers, donations may be made to Street Hope TN at www.streethopetn.org. The service will be livestreamed on the Rose - Mann facebook page at https://www.facebook.com/RoseMannHeritage/.

Robert Doyle McClenagan of Maryville, Tennessee went home to his Lord and Savior, Jesus Christ on Saturday, January 22nd. He was surrounded by his family who adored him. Robert was born on July 9th, 1948 in Knoxville, Tennessee. He was the son... View Obituary & Service Information

Send flowers to the McClenagan family.