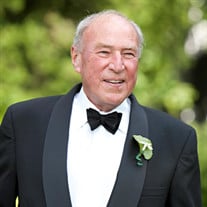 Robert Hugh Sterchi Jr, age 84, passed away peacefully On July 6, 2021. He is preceded in death by his parents Robert Hugh Sterchi and Elizabeth Prater Sterchi, and Adrienne Smathers Sterchi. Bob was born on September 21,1936 in Knoxville, Tennessee. He attended Farragut High School. He received his Business Degree from the University of Tennessee where he was a member of the Sigma Chi fraternity and worked with his father and brother building the Country Squire Motel in Knoxville. Bob served in the Air National Guard 134th Unit in Germany. During his career as a real estate developer and operator he served on the Tennessee Wildlife Resources Agency, the Health Facilities Commission, and the Knoxville County Utility Board. Bob was a plain-spoken, tough man, but underneath that, there was a sweetness few have, and if one was close enough to him to see it, they realized how special he was. He was an avid hunter and fisherman. Bob cared deeply for his employees and was an anonymous contributor to many. He had a huge heart for those close to him and will be genuinely missed by his family and friends. Bob is survived by his brother George Louis Sterchi and Gail Sterchi of Lenoir City, TN; daughters Laura Sterchi Folk (Ben) and Janet Adrienne Sterchi of Nashville, TN and son Robert Louis Sterchi (Jessie) of Washington DC.; grandchildren Benjamin Joseph Folk, Lee Handly Folk, James Reed Sterchi, Prater Elizabeth Sterchi, Leigh Benton Sterchi, Reed Wallis Sterchi and Isabelle Winton Sterchi in whom he took great pride; nieces Susan Sterchi (David Moore) of Silva, NC and Beth Sterchi of Knoxville, TN; and former wife Andralynn Underwood Sterchi of Knoxville, TN. Bob’s family wishes to thank his caregivers who became like extended family members and close friends for the love and exceptional care they provided in the final years and days of his life. The Pallbearers are George Sterchi, Louis Sterchi, Ben Folk, Wallace Graham, Bill Stokely, Benjamin Folk, Lee Folk, and James Sterchi. The family will receive friends Friday, July 9th from 1:30 - 2:30 pm at Rose Funeral and Cremation - Mann – 6200 Kingston Pike, Knoxville, TN 37919 followed by a memorial service at Highland Memorial Cemetery, Mausoleum Chapel. Online condolences may be made at rosefuneraltn.com.

Send flowers to the Sterchi family.