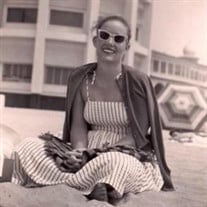 Roberta Louise (McDaniel) Venable, affectionately referred to as “Dimp,” passed away peacefully on December 19, 2021, at StoryPoint Senior Living in Knoxville, Tennessee at the age of 95. She was born to the late Arch and Lucy (Hughes) McDaniel on July 8, 1926, in Redrock, New Mexico. Louise grew up on her family’s ranch, the Bar 6, located on the Gila River in Redrock, Grant County, New Mexico, where she lived a fascinating, but harsh, life on a wild west cattle ranch. She passed on many stories of her Southwestern cowboy childhood to her children. She was educated in the Lordsburg, New Mexico public schools, as well as the American Institute of Banking. Louise was beautiful. She represented Lordsburg in the Sun Carnival, predecessor to the Sun Bowl, as princess in 1947. She met her future husband, Boyd Walter Venable, who was prospecting for mineral deposits in the area, and trying to cash a check at her place of employment, First National Bank of Lordsburg. He was immediately smitten. She married Boyd on February 23, 1949, in Silver City, New Mexico. Their oldest child, Judy, was born in Lordsburg, after which they moved to Tucson, Arizona, where Boyd managed a copper mine and their family grew with the addition of Carolyn, Boyd and Mary Ann. In 1965, they moved to Jefferson City, Tennessee, where Boyd managed a zinc mine. Louise always wanted what was best for her children and encouraged them to make their best effort in their lives. She was very kind to animals. Louise was preceded in death by her husband, Boyd, her beloved daughter Mary Ann, her brothers, Arch McDaniel, Jr. and Thomas McDaniel and her sister, Mary (McDaniel) Eddy. She is survived by three children: Judy E. (Venable) Warren and husband Bill of Morristown; Carolyn (Venable) Smith and husband Dean of Knoxville; and Boyd W. Venable, Jr. of Flagler Beach, Florida. She is also survived by nine grandchildren, Celeste, Taylor, Evan, Claire, Lizzie, Marla, Erica, Jessica and Lily and three great-grandchildren, Royston, Griffin, Brooke and Felix. Arrangements by Rose Funeral and Cremation - Mann. Online condolences may be made at rosefuneraltn.com.

Roberta Louise (McDaniel) Venable, affectionately referred to as &#8220;Dimp,&#8221; passed away peacefully on December 19, 2021, at StoryPoint Senior Living in Knoxville, Tennessee at the age of 95. She was born to the late Arch and Lucy (Hughes)... View Obituary & Service Information