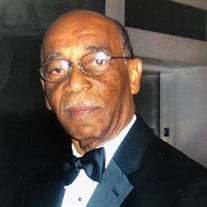 Dr. Roberto S. Benson passed away at his home in Knoxville, Tennessee on Wednesday, March 30, 2022, at the age of 81. Roberto’s remarkable life journey was filled with countless achievements and his ability to defy seemingly insurmountable odds. However, he will be most remembered for the kindness and respect he showed to all he met and his love and deep dedication to his family and his students. He touched many lives over his 81 years and will forever remain in their hearts. Roberto was born on June 29, 1940 in Colon, Republic of Panama to Alexander S. Benson and Edna K. (McLaren) Benson. He lived in Rainbow City, Panama Canal Zone, with his parents and eight siblings. He completed his secondary education at Colegio Abel Bravo. He earned a bachelor's degree in Physics from the University of Panama in Panama City, Panama. He began his career teaching Physics and Mathematics at Instituto Panamericano, a secondary school in Panama City. In 1970, he received a scholarship to study in the United States at Lewis University in Romeoville, Illinois, where he received a second bachelor's degree in Chemistry. Roberto earned his Ph.D. in Physical Chemistry of Polymeric Materials at Florida State University in Tallahassee, Florida in 1978. Upon receiving his graduate degree, Roberto embarked on a journey that took him to University of Utah for eight years, where he contributed research to the development of the artificial heart, and ultimately, to Knoxville, Tennessee where he would spend the rest of his life. In 1986 Roberto joined the Department of Materials Science and Engineering at the University of Tennessee - Knoxville. He was a professor for 32 years, serving as Associate Department Head for 12 years and Department Head for one year. He enjoyed his research in biomedical materials, but teaching and mentoring students brought him the most joy. He took many under his wing, providing support beyond the classroom, including food and housing, if needed, and endless guidance and fatherly wisdom. During his tenure, 32 students received their graduate degrees under his advising and research. In 2018, Roberto retired as a Professor Emeritus in the Department of Materials Science and Engineering at the University of Tennessee. As a person, Roberto was larger than life. His laughter resonated throughout any space that he occupied. He was constantly telling (often corny) dad jokes, and he could take it just as much as he could dole it out. In his free time, he read voraciously, usually about economics or political history. He loved working with his hands, whether it was designing and building wood furniture or painting on canvas. Roberto was a spectacular athlete from youth. While he loved to play and watch many sports, his passion was always baseball. Up until his early sixties, Roberto played softball in the church league, was the fastest on the team, and routinely hit inside-the-park home runs. And long after hanging up his cleats, Roberto continued to be a loyal fan of his Florida State Seminoles. Roberto loved to travel. Whether it was back to his beloved home country of Panama to see his mother and siblings, for academic conferences internationally, or for leisure, he covered a lot of ground and found traveling to be one of the most enriching experiences. During his time at UT, he gave presentations in Belgium, Brazil, Canada, Costa Rica, Czech Republic, England, France, Germany, Japan, Portugal, and Turkey. He also traveled to the Bahamas, Grenada, Guadeloupe, Hungary, Mexico, Netherlands, Russia, Scotland, and Spain. Many of these travel adventures he shared with his wife, Barbara. Roberto’s best attribute was his dedication to his family as a husband, father, son, and brother. Roberto and Barbara were close to celebrating 50 years together. He always provided his love, guidance, and support to his children, grandchildren, and many nieces and nephews. Roberto always acknowledged that his success would not have been possible without the unwavering support of his family and community in Panama. Throughout his life, Roberto lived by the philosophy that everyone could achieve their full potential if given the chance. He often reflected on his humble upbringing in Panama and how he was given the chance to pursue his education and career. To show his deep gratitude, he supported and advocated for anyone he could along his journey. He is survived by his wife, Barbara Glanz of Knoxville TN; his daughter Zuleika Benson-Fleming and her husband Reginald Fleming of Chattanooga, TN; his daughter Blanca Benson-Felix and her husband Dr. Pierre Felix of Charlotte, North Carolina; his daughter Liza Benson-Dirl and her husband Keith Dirl of Bolingbrook, Illinois; his son Renier Benson and his wife Hakira McLean Benson of Panama City, Panama; his son Javier Benson-Glanz and his wife Patricia Wu Benson of Brooklyn, New York; his daughter Angelina Benson-Glanz and her husband Jason Allard of Oakland, California; and his grandchildren Jeremy Chevis-Benson, Grant Fleming, Ryleigh Fleming, Brice Dirl, Brieanne Dirl, Braelynn Dirl, Brooke Dirl, Liam Benson, Leah Benson, Ander Benson, Alaia Benson, Jacob Allard, and Lillian Allard; his sisters Felicia Benson, Lucia Davis, Marjorie Franklin, Dorotea Howard, Modesta Hanley and many beloved nephews, nieces, great-nephews and great-nieces. He is preceded in death by his father and mother; his brothers Luis Benson and Jose Benson; his sister Patricia Anglin; his nephew Jairo Howard. Roberto’s family will be celebrating his life on Saturday, April 9th at Rose Funeral & Cremation - Mann located at 6200 Kingston Pike, Knoxville, TN 37919. The visitation with friends and family will be 2-3pm. The funeral service will begin at 3pm, with a reception to follow. Roberto will be buried in Panama. In lieu of flowers, the family encourages donations be made to the University of Tennessee Division of Diversity and Engagement Dr. Marva Rudolph Diversity and Inclusion Fund. Dr. Marva Rudolph was his dear friend and fellow champion for supporting students from diverse backgrounds. Online condolences may be made at rosefuneraltn.com.

Dr. Roberto S. Benson passed away at his home in Knoxville, Tennessee on Wednesday, March 30, 2022, at the age of 81. Roberto&#8217;s remarkable life journey was filled with countless achievements and his ability to defy seemingly insurmountable... View Obituary & Service Information

Dr. Roberto S. Benson passed away at his home in Knoxville, Tennessee...

Send flowers to the Benson family.