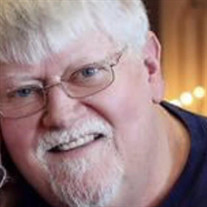 Roger Allen Matthews, 74, of Knoxville, Tennessee woke up in Heaven on Thursday, October 28, 2021. He spent the previous evening visiting his beloved son and grandchildren, then coming home to plan his next RV road trip to Florida with his bride of nearly 55 years. Roger was born to the late Reverend Morris and Doris (Granlund) Matthews on December 3, 1946 in Hazard, Kentucky. Roger was their “middle child”, birthed between brothers James and Kendrick, whom he loved dearly. Roger accepted the Lord early in his life. His decision, and relationship with Christ, blossomed into a legacy that his family, friends, and all who encountered him were forever changed by. In 1967 unlikely circumstances, or Divine orchestration, placed Roger and Donna Rose together in Chicago, Illinois where they met on a blind date. Their connection was immediate, and the relationship grew with long nights of endless conversations about life, dreams, and their faith. Donna and Roger were married only nine months later the following November. In 1968 Roger enlisted with United States Air Force and embarked on a career of serving our country that took him and his family throughout the world. While stationed in Japan in the early 1970’s, he and Donna welcomed sons Roger Allen Matthews II and Jonathan Morris Matthews. The brothers and family weren’t completed until 1973, when a beautiful baby girl, Christina Joy, was gifted to them in Florida. Roger’s career took him to Thailand, Germany, Egypt, the Philippines, and throughout America, giving the Matthews'kids a childhood and experience most never have. After serving our nation for over 30 years, Chief Master Sergeant Roger Matthews honorably retired from the Air Force in 1998, having achieved a military ranking held by around 1% of all enlisted Airmen. Roger’s Faith was often shared with others through singing and music, a passion he, his wife, and children were all gifted with. They performed together in countless churches across the globe, and perhaps just as impactfully, countless evenings together at home. Roger had a sense of humor and a love for silliness that was contagious, and led others gravitating to him for comical relief. Even with all the smiles his humor gave, Roger’s words of wisdom, love, and advice will be missed more. He loved Nebraska and Tennessee football, loved all the foods that came along with being a fan, too. Roger and Donna were in the prime of enjoying their retirement years when he was called home. Together, they had gone on many trips across the country in their RV and had hopes of embarking on many more. Roger’s greatest happiness in this life came from his children and eight loving grandchildren, who will forever miss and love him. Roger Allen Matthews is preceded in death by parents Reverend Morris and Doris (Granlund) Matthews, brother Reverend Kendrick L. Matthews, and father in law Jack Wilhoit. He is survived by his loving wife and best friend Donna Rose Matthews of Johnson City, children Roger Allen Matthews II (Kirk) of Scottsdale, Arizona, Jonathan Morris Matthews (Amy) of Knoxville, Tennessee, Christina Joy Matthews Prout (Tim) of Lowell, Massachusetts, brother James Matthews (Lou) of Norfolk, Nebraska, sister in love Reverend Lynne Matthews of Nebraska, mother in love Freda Wilhoit of Jonesborough, Tennessee, cherished grandchildren Rose, Caroline, Timmy, Turner, Matthew, Bryson, Ginny, and Madelyn, many special nieces and nephews, and dear friends. The family will receive friends on Wednesday November 3, 2021 at Rose Funeral & Cremation - Mann, 6200 Kingston Pike Knoxville, TN 37919 at 9:00 AM, service beginning at 10:00. Burial will follow at 2:00 PM at Mountain Home National Cemetery 215 Heroes Drive Mountain Home, TN 37684.

Roger Allen Matthews, 74, of Knoxville, Tennessee woke up in Heaven on Thursday, October 28, 2021. He spent the previous evening visiting his beloved son and grandchildren, then coming home to plan his next RV road trip to Florida with his... View Obituary & Service Information

The family of Roger Allen Matthews created this Life Tributes page to make it easy to share your memories.

Roger Allen Matthews, 74, of Knoxville, Tennessee woke up in...

Send flowers to the Matthews family.