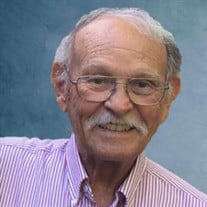 Ron Elie DuBois Jr., age 88, passed away peacefully on July 14, 2021 at his home in Knoxville, TN. He will be dearly missed by his wife of 59 years, Sonja van der Kaden DuBois, his daughters Monique (Phillip) Nealon and Elise (Reggie) Chapman, five grandchildren Emily (Chris) Lusk, Jordan Arnwine, Riley, Seth, and Matthew Chapman, and three great grandchildren Patrisha, Nevaeh, and Chris. Ron was born in New York City on July 10, 1933. He spent his young life at Oakland Academy in New Jersey. Then he attended Valley Forge Military Academy, where he won the silver cup for his skilled horsemanship (1949). After graduation Ron served in the US Army, and was stationed in Darmstadt, Germany, during the Korean War. Ron earned an associate degree in liberal arts from Fairleigh Dickinson University and moved with his family to Johnson City, TN, in 1971. He continued his education at ETSU and the University of Florida where he earned a master’s degree in building construction. Ron worked in building construction in New Jersey prior to moving to Tennessee and later worked for TVA until his retirement in 1995.The family enjoyed camping, traveling, visiting beaches up and down the east coast and learning about local history. Ron attended Erin Presbyterian Church where he was member of the Sessions and a youth leader. He was a bicentennial volunteer hosting the visitor center at Norris Dam State Park and at Fontana Dam. He also enjoyed being a docent at the Ijams Nature Park where he guided young students on the trails to learn about native plants, trees, and insects. Ron sang in church choir and was a loyal tenor singing chorus and barbershop quartet. He was recently honored with a lifetime achievement award for his 50 years of barbershop singing. The family is deeply thankful for the compassionate and professional services of the staff of UT Hospice. A memorial service will be held at Erin Presbyterian Church at a future date. Donations in Ron’s memory can be made to the American Cancer Society, Erin Presbyterian Church in Knoxville, TN or Covenant House Homeless Shelter in NYC. A graveside service will be held at East Tennessee State Veterans Cemetery on Monday, July 19, 2021 at 12:30 p.m. Arrangements by Rose Funeral and Cremation – Mann. Online condolences may be made at rosefuneraltn.com.

Send flowers to the Dubois family.