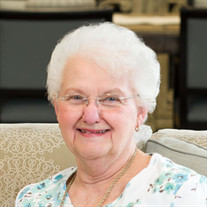 Rosemary Carol Nitsche Pryor, 82, passed away unexpectedly but peacefully at home on September 3, 2021. Rosemary was born in Chicago, Illinois, to the children of German immigrants, on February 1, 1939. After graduating in 1956 from Niles Township High School in Sauganash, she attended Drake University in Des Moines, Iowa, and received a Bachelor’s degree in Commercial Art with a minor in Business. Shortly after graduation in 1960, she moved to Washington, D.C., followed soon by a move to Panama in Central America, where she worked for the Central Intelligence Agency. A foreign service career was truncated when she met William Samuel (Bill) Pryor while he visited his sister, a CIA colleague of Rosemary’s. After a single week of in-person courtship and six months of exchanging letters with Bill, she resigned and moved back to Chicago where she married him on June 29, 1963, and then began her life’s rich adventure in his hometown of Knoxville, Tennessee. While she worked periodically as a church secretary and substitute teacher, her lifelong joy was as a loving and devoted wife and a dedicated and selfless mother and friend. She created a warm, comfortable and inviting home for Bill and their three children, and any guest who walked through the door was treated like family. She approached the whole of domestic life with cheerfulness and a spirit of service. She managed the household finances, canned vegetables from the garden, mended clothes and sewed new outfits. She helped her kids with homework, drove them to music lessons and track meets, and provided practical advice that they sometimes heeded. Her servant’s heart was also demonstrated in thousands of meals she cooked for college students at the Christian Student Center on the University of Tennessee campus, visiting the ill and the bereaved, and in other acts of kindness large and small that modeled Jesus’ love. Her artistic talents were expertly applied in church projects, nature drawings, and funny doodles and sketches tucked into birthday cards. She taught her children to seek out the wonder and beauty in small things, encouraged them to travel and know other places, and she brimmed with pride in them and her grandchildren until her last day. She was a faithful member of Laurel Church of Christ for 58 years. Rosemary is preceded in death by her parents, Arthur and Hildegard Nitsche, her sister Marilyn Rutherford, and her twin brothers, Arthur Nitsche, Jr., and Robert Nitsche. She is also preceded in death just last October by her cherished husband Bill. She is survived by her son James Arthur Pryor (Kelly), daughter Rebecca Pryor Hancock (Steve), son Thomas Malcom Pryor, and grandchildren Caroline Brooks Pryor and Joseph William Woodard Pryor. She is also survived by nieces and nephews and other extended relatives. Countless friends will miss her dearly. The family wishes to thank Ursula Hall, Ganna Kidd, Tabatha Chambers, and Carolyn Whitney for their kindness and care to Rosemary during her final months. A physically-distanced memorial service will be held at Laurel Church of Christ, 3457 Kingston Pike, on Tuesday, September 7, at 4:00 p.m. The service will not include a traditional receiving of friends, and attendees are required to wear masks. In lieu of flowers, the family requests donations be made in memory of Rosemary to the Joy of Music School or the Christian Student Center (c/o Laurel Church). Arrangements by Rose Funeral and Cremation – Mann. Online condolences may be made at rosefuneraltn.com.

Rosemary Carol Nitsche Pryor, 82, passed away unexpectedly but peacefully at home on September 3, 2021. Rosemary was born in Chicago, Illinois, to the children of German immigrants, on February 1, 1939. After graduating in 1956 from Niles Township... View Obituary & Service Information

Send flowers to the Pryor family.