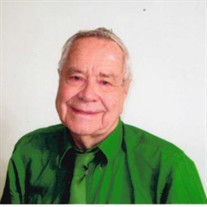 Rudolf “Rudy” J. Friederich, aged 91 years old, passed away January 30, 2021, peacefully in his sleep. He was born to Rudolf and Elsie in New York City. In 1943 he became the youngest Eagle Scout in The Bronx Council at the age of thirteen. For over 50 years Rudy was an amateur radio operator. His call sign was W2FRE and KV4J receiving Extra Class license privileges. He served in the Korean War as a high speed radio operator, company teacher, and company armorer. His overseas unit was the 97th Signal Battalion in Boblingen, Germany. Rudy received a Bachelors of Science from Fordham University, and a Masters from Hunter College. He held two years of postgraduate credit. He retired from elementary school teaching after twenty-five years in Upstate New York. In 1976 he received the Valley Forge Teachers Medal, a patriotic award. While teaching, he spent twenty years researching the Medal of Honor, the nation’s highest award for valor. His work, Medal of Honor Citation Supplements, 1968, was recognized by the Congressional Medal of Honor Society. He also authored, “Aircraft Carriers, An Operational History.” Rudy also received his wings as a Private Pilot. He became a Tennessean living in Knoxville since 1989. Rudy was an acknowledged Big Brother to Chris Geddings of North Carolina, then in the Souththeast region. He also volunteered as a guardian ad litem, Treasurer of Christian Aid Services, Grants Director for FEMA, Voucher Dispenser for the Red Cross during Hurricane Katrina, and as a religious teacher at All Saints Catholic Church. His first wife Margaret Goetsckes with whom he had four children: Rudy, Regina, Patty, and Carol, preceded him in death. His daughter Patty, an attorney in New York, also preceded him in death. Rudy is survived by seven grandchildren: Jennifer, Katherine, Patricia, Ally, Erin, Keith, and Kevin, as well as six great grandchildren. Rudy remarried to Jill Fitzpatrick, also a teacher; their only child, Frederick John, perished at birth. After 48 years of marriage Jill also passed in 2011. Rudy’s passions included community service, reading, writing, collecting stamps, coins, and Carnival Cruise postcards, as well as musical film DVDs. He was also an avid New York Yankees fan. Friends and family may attend services electronically at 10:30 a.m. Tuesday, February 2, 2021, on the Rose Mortuary Facebook page at https://www.facebook.com/RoseMannHeritage. The burial will be held at 1:00 p.m. at Tennessee Veterans Cemetery, Lyons View, Knoxville. Friends and family are invited to make donations to the All Saints Catholic Church Faith Formation program in lieu of delivering flowers. Arrangements by Rose Mortuary Mann Heritage Chapel. Online condolences may be made at www.rosemortuary.com

Send flowers to the Friederich family.