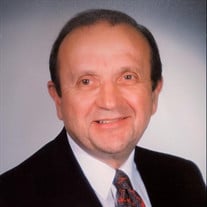 Rudy G. Novak, devoted husband, loving father, grandfather, and friend of many, passed away on March 30, 2021 at the age of 91. Rudy was born September 30, 1929 in a suburb of Chicago, Illinois. He is the son of Czechoslovakian immigrant parents, James Novak and Mary (Bartunkova) Novak. After graduating from Illinois Institute of Technology with a BS degree in Chemical Engineering, Rudy was called up by the Army. There he qualified to work in the Army’s laboratories with the development of transistors. After his military service, he was hired by Dow Chemical Company in Midland, Michigan, where he met his wife of almost 65 years, Mary Jo (Hoyer) Novak. Rudy’s career at Dow soon began to focus on environmentally friendly ways to dispose of hazardous waste. Personal development was important to Rudy, and in the early 70’s he earned his Professional Engineering license for the states of Michigan, Tennessee and Louisiana. In 1975, he was transferred to Knoxville, Tennessee with a new subsidiary of Dow Chemical Company named Hydroscience. He always had a great passion for his work. He published many technical articles and was a contributor to several US Patents. After enjoying a 40-year career, he retired and became a private consultant and was hired as an expert witness on many notable cases. Rudy was a devout Christian and a member of Cedar Springs Presbyterian Church for 44 years. He served as an elder for 30+ years and started a men’s Bible study group that is still active today. This group was a constant source of encouragement during his transition from home to assisted living, for which his family is so grateful. He also had a passion for prison ministry where he taught very practical lessons such as how to forgive, pray, and give your life to Christ. He maintained a strong faith in our Lord Jesus Christ until his passing. He is survived by his wife, Mary Jo. Children: Diane Cross, David Novak (Holly), Deborah Jagoe (Dan) and Barbara Marine (Tom). Grandchildren: Zach Cross, Kayla Cross Ramic (Adis), Bryce Novak, Kyle Novak, Jonathan Jagoe, Matthew Jagoe, Ryan Marine, Chase Marine, and Reese Marine. Great-grandchildren: Mia Ramic and Beckett Ramic. A private memorial service for immediate family will be held at Rose Funeral and Cremation - Mann, followed by interment at Highland Memorial Cemetery. The family would like to thank the nurses and staff at Fresenius Kidney Care as well as his friend and caregiver, Carvin Dupont, who assisted him at home for over 2 years. We would also like to thank John Shaulis and Ralph Lillard for their friendship and support over the years, and the nurses and caregivers at Shannondale Health Care Center for all their support during Rudy’s last days. In lieu of flowers, the family requests donations be made in Rudy’s name to the Global Mission Fund at Cedar Springs Presbyterian Church, 9132 Kingston Pike, Knoxville, TN 37923. Arrangements by Rose Funeral and Cremation - Mann. Online condolences may be made at www.rosefuneraltn.com.

Rudy G. Novak, devoted husband, loving father, grandfather, and friend of many, passed away on March 30, 2021 at the age of 91. Rudy was born September 30, 1929 in a suburb of Chicago, Illinois. He is the son of Czechoslovakian immigrant parents,... View Obituary & Service Information

Send flowers to the Novak family.